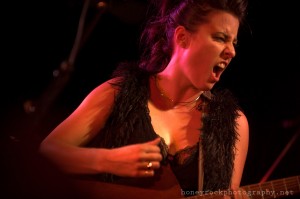 A veteran and darling of Australia’s music industry, Melbourne singer and songwriter (not to mention, writer and painter), Jess McAvoy, has now moved to the US to show the northern hemisphere why her home country fell in love with her.

Have a read of her inspiring Q&A with Lip, and just keep your fingers crossed that we get to see her down under sooner rather than later!

Was there a particular moment or artist that made you want to pursue music when you were growing up? Who were your early influences?
Madonna got me thinking that in the absence of superpowers one could reach many people through music. I was six when my attention shifted to fame. I started writing music properly when I was about thirteen, and performing when I was sixteen, but it wasn’t until I was in my  late teens that I started paying attention to music, and musicians. When my Tori Amos obsession took hold, everything changed.

What are your other interests/passions?
Learning is my first passion, so I tend to put myself into extreme situations to learn things as fast as I can. I’m also an exhibiting painter and a general creative. I love making things. Always have.

Who do you most admire?
I get a real kick out of watching powerful women creating new opportunities for other women by leading by example. Particularily those who do it gracefully, and groundedly.

Greatest achievement to date?
Not quitting is a big achievement, which is a large reason why I moved north. I’ve had the privelage of performing some pretty amazing shows, my farewell show was no exception. I got to headline the Corner Hotel in June, and had guest appearances by Liz Stringer, Dallas Frasca and Gotye. It was a pretty amazing night.

A song I wish I wrote/played is…
Feeling Good, Nina Simone.

I couldn’t live without…
Love. Music.

The best advice I ever received was…
There is an audience for everyone. And that you should become the example of what’s possible, rather than looking for examples of what you want to become.

Do you think the music industry treats female musicians differently to male musicians? Do you think it’s more difficult for women to establish themselves?
I think everyone treats women differently to men.  In Australia particularly women aren’t heard as much as men are. It’s the way we have been conditioned throughout history. Having said that, I think one must take these challenges and create a new reality. We have to become the change by helping one another. I think that’s the greatest hindrance for women in any industry. The unwillingness to bond together and become a force.

Is there anything you’ve always wanted to be asked?
I feel pretty lucky that people think my opinion on things matter. So as long as that continues I’ll take my chances on what questions that turns into.

Jess is playing at New York City’s Bitter End on Dec 27. You can purchase her various releases at her website.