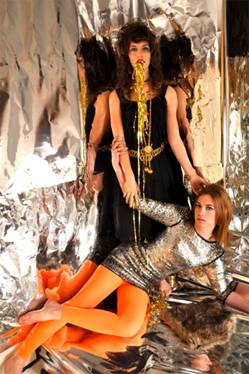 Lip was lucky enough to chat to one half of Prince Rama, Taraka, ahead of the duo’s Australian tour! Read what they had to say about Australia, the Beatles, their latest album (Trust Now), and time travel!

Describe your sound in five words or less.?
BE HERE WOW

How are you feeling about coming to Australia? Anything in particular you’re looking forward to? Bands to meet, to play with, stuff to eat, anything you’ve heard of in particular?
Feeling pretty terrified to come to Australia honestly. It will be like traveling into the future. You guys are like 17 hours ahead of ?us. That is a far leap across time. What if we forget our past? Ah? well. All lies. We’re looking forward to meeting some strange wildlife ?in this far off future world. We are excited for minds to melt and ?hearts to break and koalas to take pictures with.

This might sound a bit ignorant, but has the Hare Krishna community (who thrive on music) had anything to say about how you.. say, ‘revolutionized’ incorporating chants into your music?
We definitely haven’t revolutionized anything. These chants have been? around for thousands of years. We just take them and screw them up.

I understand Prince Rama has gone through a bit of reshuffling for Trust Now, please indulge on that panned out!
Yes, a bit of reshuffling! We parted ways with our old keyboard ?player, Michael Collins, a little over a year ago before recording it.? It has been an adventure and a challenge to try and replicate the wall ?of sound with just the two of us. Then we realized it wasn’t a wall we? were after, but a leap through the window. That is what Trust Now is? about. Leaping through that window.

Any future plans with Paw Tracks? It’s been a little while since your encounter with Dave..
Why yes actually! We have already written a whole other album, which?should hopefully be out in time for the apocalypse.

Do YOU have any questions about Australia??
What is technicolor yawn?

Was there a particular moment or artist that made you want to pursue when you were growing up? Who were your early influences??
For sure! Honestly, as cheesy as it sounds the Beatles were the first? Western band we heard outside of devotional bhajans. Like any normal? kids, we wanted to be the Beatles. Then Hanson came out when we were in elementary school and we wanted to be like them. We grew up in pretty remote towns in Texas, so we didn’t have access to a ton of? music outside of what our parents listened to or the top 40 station. I? also was pretty interested in musical theatre… before wanting to be ?a musician, I dreamt of being a Broadway actress. I memorized a bunch of songs for musicals. There was something attractive about the idea ?of a complete art form that was very inspiring early on… musical?theatre seemed to contain the sets, the costumes, the music, the?dance, and theatre all in one. A truly simulated environment.

What are your other interests/passions?
We love to dance.

Who do you most admire?
Our mom.

The best advice I ever received was…
“Let yourself go, let love begin” –Fleetwood Mac

?Do you think the music industry treats female musicians differently to? male musicians? Do you think it’s more difficult for women to establish themselves??
Not unless you identify with being a female musician. I think there ?are a decent amount of female bands/artists who capitalize on this? fact that they are girls. The way we feel is that, ok sure, we’re ?girls, but let’s get on with the show. No need to make a big deal? about what’s pretty obvious. Maybe if being a girl was part of your ?”thing” you’d be more aware of gender differences. We just choose not ?to identify with those differences.

Prince Rama will be performing at Melbourne’s Sugar Mountain Festival this Saturday, Jan 14, before doing a run of dates around Australia New Zealand. Check their facebook page for more details!