nothing to lose: placing fat bodies front and centre 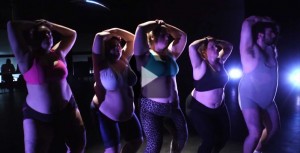 Smashing stereotypes about fat bodies, Nothing to Lose is the critically acclaimed dance production by Force Majeure that opens at Melbourne’s Malthouse Theatre next week after a sold out premiere season at the Sydney Festival. Artistic Director of Force Majeure, Kate Champion says:

‘My interest in working with bigger bodied, fat dancers has been in exploring the movement and sculptural quality of the larger physical form.’

It is a well-documented fact that people considered fat, particularly women, are routinely shamed and stigmatized. To be fat is to be associated with a whole range of socially undesirable traits, most of them the product of false social stereotypes and pseudo-logic. In a society where fat bodies are shamed, covered up and generally preferred as invisible, unapologetically placing fat bodies on the stage in a way that empowers, explores and celebrates them is an inherently political act which Champion understands well:

‘I am not aiming to promote or dispel a health message, nor am I being driven by the political debate around body size. Having said that I understand that simply putting a fat body on stage, in some people’s opinions, is a political statement.’

‘As an artist and a woman of size, my creative practice and my body politics are inseparable,’ said Drinkwater.

‘I am constantly inspired by the potential of this ‘otherness’ which often manifests in a desire to explore what is considered prohibitive to the larger body.’

Speaking with Fairfax Media, Champion explains that what makes Nothing to Lose so unique is that rather than being preoccupied with size, the production instead focuses on what fat bodies can do:

“There have been shows with fat people in them before, maybe fat people dancing, but they’ve all been in the reality ilk and tend to still hang on to the body shaming, or fat shaming side of it…we’re actually generating movement and a show with fat people, and it’s coming from them rather than from people outside who are imposing the show or the program onto them”.

Also speaking with Fairfax, Drinkwater describes the show as an ‘authentic look at the fat experience’, which isn’t always positive:

“It’s not all just happy dancing fat people – we really go there in terms of the judgment that’s put on our bodies.”

Nothing to Lose is not a morality play, neither was it created to change the views of its audience in 70 minutes. Instead, the production seeks to explore the beauty and uniqueness of fat dancers, who move in an entirely different way to their thinner counterparts. Fat bodies can do things thin bodies can’t, and this should not only be respected, but seen.

Nothing to Lose is showing at the Malthouse Theatre from March 11 – 21. Tickets from $30.