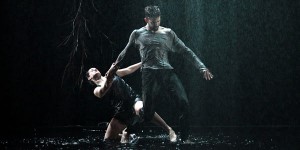 Showing as part of the Gasworks’ Moving Parts season, Lake is Lisa Wilson’s first full-length work as a choreographer. She has succeeded in master storytelling without words. Lake is a picture of the Australian landscape; drawing out both its beauty and its inherent and sometimes frightening power. Interested in ‘using water as a metaphor for human emotion and what happens when we break the surface tension of a relationship and dredge up what lies beneath’. Wilson successfully employs the sense of place to explore and unravel psychological undercurrents.

There is a brief moment of contemplative stillness to consider Lake’s stunning set. The stage is submerged and in the darkness the water becomes a fluid mirror: reflecting the gnarled trees growing from the ceiling, stretching the performer into impossibly long, sinewy distorted limbs. It breaks apart as Hsin-Ju Chiu escalates her steady rhythmic movements to skittish and electric writhing. She’s elemental, a creature belonging to the wilderness, at once a flitting gnat, Spirit and nymph.

Chiu’s frenzy is interrupted by the entrance of Timothy Ohl and Kristina Chan. They’re two campers, young, in love and in the wilderness. They enter with a raucous belly slide and heavy steps, with torches, chairs and fire, making claim to the space and sending everything natural into a startled retreat.

It immediately becomes clear that Lake is about untangling the structures that we use to define our environment and ourselves. If the campers are human, if they are culture and civilisation then the Spirit is nature, a raw embodiment of all that is primal and other to the contained strictures of society.

Chan and Ohl succeed in illustrating a kind of comfortable ordinariness in their relationship through dance. Playing at two lovers whiling away time with each other, they tussle and flirt, throw each other in the water and play. Slowly though the play becomes more aggressive and then sinister. Their initial conviviality devolves to antipathy and as their relationship fractures they lose the trappings of society they bought with them. At first a mobile phone thrown in the water, then a sodden map, a broken torch until at last the fire is extinguished.

If before their gesture had echoed conversation it is now the manifestation of raw bodily power: a haptic communication more powerful than words, more limbic than conscious. The tension builds, wrought out in a series of dichotomies. Of culture against nature, of man against woman and of one’s own rationality against one’s darker more atavistic self.

Despite the intensity of the work it doesn’t take itself too seriously; unafraid to approach moments of levity, it imitates the ebbs and flows of disintegrating human relationships. Ohl’s light-heartedness provides a counterpoint to the darkness with a cheeky whistle and quick splashy tap dance with a nod to Gene Kelly.

The man and the woman are coaxed apart by Chiu’s lake Spirit, the dance rising to a crescendo that pulses with emotion. Cycling through eroticism, anger, affection and at times indifference, the performers play off each other, interspersing solos, duets and trios. In their interaction there is the constant spectre of death and the renewal of resuscitation. For the most part the pace works to keep the drama elevated.

At times the dance is stilled and attention turns to audio-visual projections. These vary, from the dancers filmed under water to ghost like avatars of the characters play-fighting. Perhaps intended to provide a moment of pause or even comic relief they tend on the clumsy side, undermining the fragile tension created by the performers.

Lake is a testament to the whole production team. The dancers are aided by Matt Cornell’s dark and dirty score which rises and falls, giving way to silence and to the ambient noises of nature, to calls of birds and crickets. Bruce McKiven’s set is evocative and combined with the minimal costumes, truly beautiful. In combination with Wilson’s direction the elements come together to make the lake a powerful character in its own right.

Lake was showing at the Gasworks in Melbourne from March 21– 22 and is touring nationally until May 2014.