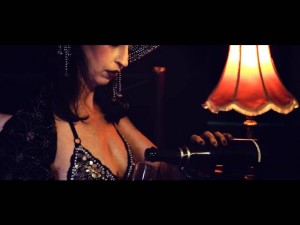 While Melbourne based performance school Bottoms Up! does not seek to host such a dinner party, they  do explore the lives and stories of the great women of erotica throughout history in their newest production Tied Together Still.

Performed in the basement of the historic Donkey Wheel House on Bourke Street, Melbourne, Tied Together Still treats audience members to an experiential theatre show which involves various performances, mediums of art, dance and film. The audience play a role too: immersed in the living museum, we were presented with representations of famous erotic female figures, dances, movements and literary characters throughout history, such as Bettie Page, Aphrodite, Marie Bonaparte, Mata Hari, The Can-Can and Lady Camellia. Each representation was performed in an individual room or space close that allowed audience members to walk through and watch performances as they pleased.

Every space you walked into felt like you were walking in on something, perhaps a secret insight to the idea of female sexuality. The way that the audience was involved set an overall tone of playfulness that fed into the success of their engagement. There were also guides who were part of the performance but also assisted when you didn’t know where to go. At one stage, my friend and I were a bit lost and were promptly whisked away by a little helper who took us to a quiet room and started reading us Little Red Riding Hood. She stopped and cheekily asked, “Was this what you were expecting?”

I unfortunately didn’t get to see all of the performances (performances were timed to follow on from each other depending on the proximity of the room) but did find some of the less elaborate pieces, such as Venus standing in a room alone and naked or the symbolic Pagan fertility dance of the Maypole, quite powerful.

In the context of the museum, the female body in all of its shapes, colours and dimensions was something to be shared and enjoyed by female and male audience members. Each of the 13 women had their own unique story that was intrinsically linked to a broader narrative around social perceptions of female sexuality. Female sexuality is often portrayed as something wrong and even grotesque. Although the performances sat under the umbrella of women and eroticism, I didn’t once feel like the female body was something to be afraid of or unsettled by. All performers were natural, beautiful bodies on display purely to entertain. It was oddly refreshing to see a completely naked woman walk through a crowd of people and see no-one bat an eye lid. It was wonderful; women were just women and equal with one another. What made each woman special was their story, not their anatomical bits and pieces.

To tie it all together, the cast performed their version of The Can-Can. Here they dressed up in ridiculous tutus, animal hats, colourful wigs and entertaining knickers (from lacy underpants to what appeared to be underpants with tiny stuffed animals attached) performing a fun grand finale that caused one audience member to reveal “oh my god my face is going to explode from adorableness.”

Expect the unexpected with Tied Together Still and you will be enchanted and constantly surprised. The show is running from 30 July until 3 August for your viewing pleasure.

One thought on “performance review: tied together still”