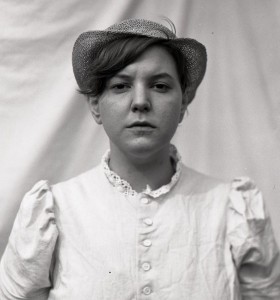 Anja Loughead, self portrait. Image: courtesy of the artist

Populate or Perish! is an exhibition by Canberra based artist Anja Loughead currently showing at Canberra Contemporary Artspace (CCAS) Manuka until this Sunday, March 15. Through the work presented in the exhibition, Loughead brings to attention Australia’s long running and highly constructed narrative of migration, and questions the truths and prerogatives behind the propaganda. Lip caught up with the artist to find out more:

Hi Anja, tell us a bit about yourself

I finished my Bachelor of Visual Arts (Honours) at ANU in 2013. Since then I was a Studio Resident at the Canberra Contemporary Art Space (2014) and fortunate enough to receive an ArtStart grant for emerging artists at the start of this year.

In addition to my visual arts practice I am also a musician. I currently play in a ‘post-punk’ band, called Wives.  Previously I was in the now defunct bands Sweet Shoppe and Sex Noises.

How would you describe your practice?

I always have trouble trying to summarise my visual art practice but to be succinct I would say that I am a photographer and installation artist.  I find the way in which photography is used in society as a means of communication both troubling and fascinating. My practice explores the information that is contained within a photograph and then to subvert it.  This always seems to physically manifest itself through archival imagery coupled with objects, allusions to otherwise untold narratives.  I like to think that my visual art practice is more pensive than my methodology as a musician. 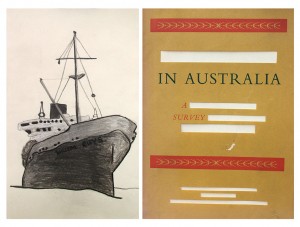 Anja Loughead, Populate or Perish!, 2014. Image courtesy of the artist

To be quite honest I really struggled throughout my time as a resident at CCAS. I had a lot of doubt about the quality of my work after leaving the School of Art and as a result I made very little for a long time.  I stumbled across some old newspapers articles by chance and that finally forced my hand to make something. Before that I just hung around CCAS complaining and writing my grant proposal.

What was life like for migrants at the Bonegilla Migrant Reception and Training Centre, and how does this body of work seek to convey that experience?

Well my grandparents never discussed the time they spent there, but I think that has to do with the fact that most Finnish people don’t really talk a great deal about themselves.  From the variety of resources that I read the migrants seemed to fluctuate from frustration to a hopeful perspective of a new life.  My body of work Populate or Perish! tries to visually embody both stillness and melancholy, a reflection on the lives of those who suffered either mentally or physically trying to transition into a new life in Australia.

Do you see any parallels between migration policies then and now?

Definitely. There were riots, malnutrition, death and a government that shifted blame. 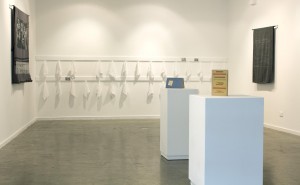 Initially the push for European migration to Australia was a means to raise the country’s military defense and economic position. There was a great deal of fear surrounding an invasion from Asia so the White Australia Policy came into effect to counteract this.  To be blunt, I personally think that Australia’s previous and current migration policies have been a result of a propagated fear of ‘the other’.  News coverage of the current processing centers are still half truths.

You’re one busy lady at the moment! What else is on for you?

Haha I suppose so! I will be starting work on my next solo exhibition Finland, Motherland, Homeland that will be showing in August at Sawtooth ARI in Launceston, Tasmania.

I am also about to launch an online art criticism website called Topical Ointment. I really wanted to provide a platform for young artists and curators to create a dialogue about emerging visual art. So keep an eye out for that one.

Populate or Perish! is currently on display at CCAS Manuka until 15th March

The Australian Screen will be screening at the launch of Noted – WORDS: art, text and digital spaces on 18th March in conjunction with You Are Here