property of the clan: review 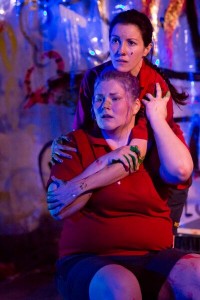 Showing until the 17th of October at the newly opened Blood Moon Theatre in the heart of bustling Kings Cross in Sydney is The Property of the Clan; a riveting and emotional roller coaster ride that takes you through the true story of the rape and murder of a 14-year-old girl in Stockton, Australia in 1989.

The Property of the Clan, presented by Don’t Look Away and Blancmange Productions, was written by Nick Enright in 1992 and turned into a film in 1997, Blackrock. This modern adaptation, directed by Phillip Rouse, holds its audience in a firm grasp from beginning to end. The writing, the tight acting, and the slick direction all form into a 90-minute presentation of one of the most horrific events that could ever grace the lives of a group of seemingly innocent young people.

Although this play is now over 20 years old, the relevance is still as strong as ever. With the aftermath of the Rooty Hill gang rape of a 46-year-old woman just months old, Sydney and Australia, and the world, is constantly facing issues of violence and sexual abuse towards women. The storm doesn’t seem to be ceasing, in fact, it seems to be picking up speed.

The Property of the Clan has eight characters, but this adaptation has only four actors. Jared (George Banders) is dating Rachel (Megan Drury), goes to school with his sister Jade (Samantha Young) and is friends with party boy Ricko (Jack Starkey). Jared and Jade’s mother is Diane (Drury), Glenn (Starkey) helps Rachel discover the truth about the murder of their schoolmate Tracy, while a teacher and Rachel’s mother Mariam (both played by Young) watch on, helpless to the tragedies that unfold.

We follow this group as they attend Ricko’s welcome home party on a beach late one night. Jade isn’t allowed to attend, but wakes up in the middle of the night in a cold and anxious sweat, yelling out that she’s seeing faces. Her mother coaxes her back to sleep, yet in the morning the town wakes to the terrible news of the rape and murder of Tracy, just 14 years old, and good mates with Jade.

What spirals from this tragic event is a web of lies, emotions, guilt, and cover-ups. Each character, whether male or female, has a part to play in the why and how of what has happened, yet they are all searching for who they can actually blame.

The result is a play that reaches out to its audience and asks them to think long and hard about the process of ‘fitting in’ and being accepted. We are forced to think back to high school, to when we would do pretty much anything to be accepted by a group of peers. This pressure is all too relevant today, and it showcased in its true grit and horror, as we realise that young men are doing what they’re doing only because they want to be accepted, and only because they haven’t been shown any other way.

A truly heartbreaking moment is when Jared, at a loss for words and hiding from the world, is told by his mother that he needs to ‘open the door.’ That it’s okay to seek help, to talk, and to open up about his feelings. He refuses, he’s a man after all, and what would his friends think of him?

There’s so much going on here that I can only just scratch at the surface. But one thing is for certain, The Property of the Clan is a must-see, for both the educated and the non-educated, the young and the old, the female and the male. It teaches us that we must  take it upon ourselves to make change and to influence others to take positive steps, because if no one will, then how will anything get better?

Click here to purchase tickets to The Property of the Clan at Blood Moon Theatre in Sydney, on now until the 17th of October.

2 thoughts on “property of the clan: review”