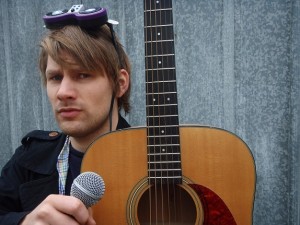 Al Newstead knows music; freelance music journalist and Triple J favourite by day, comedian by night. Write about what you know, as they say.

I chatted to Newstead about blunting hipsters, sex in music and fighting Beatles….to say the least.

‘I’m a freelance music journalist and a comedian,’ Newstead explains. ‘I’ve written for the likes of Beat, MX and triple j magazine in the former and had experience in the University Law Revue scene and several Comedy Festivals (“think of a car crash between a Volkswagen ferrying Bill Bailey to a Flight of the Conchords gig with that of a Ford Datsun filled with iPods”) in the latter.’

Who is the best ranting musician?
The Gallaghers always give great quotage. The obvious answer would be someone like Bono; it’s obviously become hip and cool to hate Bono again. But I don’t actually think he really deserves it sometimes: sure, he’s a knob, but there’s plenty worse. Like Sting. Just Google Sting: he says some amazingly self-important twaddle. Ke$ha, or as I call her “Ke-Dollar-Sign-Ha”, spouts some equally ridiculous ire.

I think on any given day, there’s a rapper-of-the-month complaining about the difficulties of small car garages and gun polish. But then you’d expect them to spout nonsense, wouldn’t you? Closer to home, I think Nick Cave is an economical ranter with his clipped dismissals and what-not, always entertaining though. I could go on, see, a bit of a ranter myself…takes one to know one.

Tough question, I know, but: top five favourite records?
Now that’s an impossible question to ask a music-lover. You’d probably have to be more specific, maybe an arbitrary category or something? Like “Top Albums To Blunt Hipsters With” or “Top Five Worst Album Art of all-time”- which is Scorpions’ Love Drive while we’re on topic.

I think I’ll go with “Top Five Favourite Records” at the moment – can I do that?

I guess that could also be Top Five Artists with really cool band names. See, it’s the serious musician side coming out now, leaving my comedic half to sulk in the corner with his one-liners. It’s a constant inner struggle.

A loaded question to follow: what’s your take on The Music of Young People Today?
There’s a joke in the show that sums it up nicely: “Sex Offender Music.”

I just think a lot of pop music these days is a commodity, or to quote Alex Turner [Arctic Monkeys’ front-man]: “There’s only new music so that there’s new ring-tones.” You know, it’s just to sell something, and I think it’s most often selling sex. The female pop stars of today especially – Rihanna, Katy Perry, Lady Gaga, Ke-Dollar-Sign-Ha – sex is all part of their image and appeal, even if it’s not explicitly in their lyrical content.

I guess that seems sexist or misogynistic; I mean, I don’t have a problem with feminine assertion. This is the point where I defensively insert a reference about my unrequited love for Joni Mitchell. But I think someone like Bat for Lashes or Bjork convey the same alluring dominance and creativity without resorting to objectifying themselves.

At the end of the day, it’s all a matter of taste. That’s my get-out-of-jail-free card, and there is still a lot of great music of ‘the young people.’ Like the synth-pop movement and eighties revival, but I think it’s really important that we don’t forget music’s history and its cultural importance over its power to soundtrack telephone companies and car adverts. It’d be like prioritising a Kinder Surprise for its chocolate and not the toy. C’mon, let’s be honest: that’s really what’s great about it.

Your most hated band/song/artist/genre.
Oooh, that was a nice follow-up question. Well, there are not so many bands that I hate, just things that I don’t dig – and that’s fine. I don’t hate Aussie hip-hop, I just don’t get it – I don’t see the appeal, it sounds to me like a bunch of middle-class white guys complaining about the difficulties of the private school system or having to endure the crippling self-esteem issues that go with buying clothes from Target.

It’s got nothing to do with hip-hop’s original intentions. But I digress, if we’re talking about stuff that has me gritting my teeth with powder-grinding intensity? Black Eyed Peas front and centre, James Blunt: soporific, Nickelback: knuckle-dragging idiocy and Rogue Traders. In fact Rogue Traders perfectly embodies what I detest; they ‘borrow’ music and create undead-pale imitations of the originals. Carbon clones with no passion or soul, like vampires with no teeth, or a Kinder Surprise without the toy… or the chocolate… I’m fighting for this analogy.

Which of the Beatles do you think would win in a fight?
A Fight Club question! That’s a tough one; I mean, if we’re going for realism it’s obviously Paul or Ringo, but in a fantasy match-up? Well, unfortunately the polite Mr. Starr would be first out, he would be all like: “Guys, I don’t think we need to argue about this, let’s all just get al-…” cut-off mid-mediation with a sucker-punch right in the schnozz from Harrison’s exceedingly long reach.

Lennon would cheat and swing Yoko around like a wailing flail, Paul’s  a nimble git, so he’d fare alright, but I think Harrison would emerge victorious – he had the best facial hair after all.