refusing to choose between traditional femininity and radical feminism: interview with anonymous artist ambivalently yours 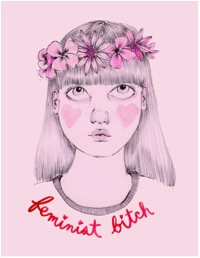 Image courtesy of the artist

In an unashamed defiance of the rigid conventions associated with female identity, anonymous artist Ambivalently Yours’ witty illustrations celebrate the colour pink, ‘cuteness’, cats and being a badass who “doesn’t take shit from anyone”. These seemingly incongruous identities are reconciled in seamless pastel works that speak to women from all walks of life through its exploration of what it means to be a feminist in contemporary society. Inspired by messages sent from women all over the globe, Ambivalently Yours’ illustrations flawlessly depict the everyday thoughts, feelings and obstacles of women in 2015.

How did you get started as an artist?

I’ve been interested in drawings since I was a child. I remember getting in trouble in kindergarten for spending too much time in the art and crafts corner. I was a shy child, so all I ever really wanted to do was draw. It made it easier for me to interact with other kids when there were crafting materials around.

What inspired you to start the Ambivalently Yours project?

When I first started Ambivalently Yours I was studying feminist art and working in the fashion industry, which seemed like a huge contradiction. At work, I was the feminist killjoy every time I raised a concern about the sexist undertones in our campaigns, and in art school I was the fashion girl who many assumed was duped by the patriarchy just because I liked cute clothes and girly colours. I felt caught somewhere in-between two worlds that I both loved and hated at times, in other words I felt ambivalent. Eventually, I decided to stop worrying about what others thought of me and embrace my contradictions. Ambivalently Yours became my way of exploring my feminist questions from this in-between place where things are undefined and pink can be powerful.

What does ‘ambivalence’ mean for you?

Ambivalence means loving and hating simultaneously, which is often confused for an inability to make up one’s mind, or not having a strong opinion.  Embracing ambivalence has given me the freedom to resist defining myself too narrowly. Part of being a feminist is about advocating for a woman’s right to choose. This right, however, does not imply there is only one choice. For example, my commitment to feminism could only occur once I gave myself permission to also embrace my love of fashion and the colour pink, two things often associated with the patriarchal domination of women. This refusal to choose between traditional femininity and radical feminism allowed for another space to exist: not a space of indecision but rather a space of undeciding. I call this space: Ambivalently Yours. My commitment to ambivalence is about learning to ask more questions rather than get stuck with incomplete answers.

Tell me a little bit about the Ambivalently Yours journey so far?

When I first started Ambivalently Yours, no one was really paying attention, so my drawings were just an extension of something I had done since I was a kid. In time, people started finding me online and writing to tell me how much they could relate to my drawings. Some people also started sharing their own stories with me, to which I began responding with drawings. The act of sharing my emotions through my illustrations has allowed me to have conversations and feminist discussions with people from all over the world, and these exchanges are now the main inspiration behind my work. There is this belief that women who show too much emotion in public are either weak or hysterical, yet for me, the act of illustrating my feelings and posting them online is what has made my work more badass.

My desire to remain anonymous online was initially motivated by fear. When I began this project, I was mainly being critical of the fashion industry, which also employed me and gave me the wage I needed to live. I decided to make my work anonymous to ensure that my artistic work would not affect my ability to make a living. The Internet can also be a volatile place and my work is always inspired by personal experiences, so I found that the only way I could be honest without making myself too vulnerable was to be anonymous. In other words, my anonymity was a form of self-preservation, which in turn gave me courage to be more daring in my art. Later, I realized that my anonymity allowed for people to find themselves in the lack of specificity of my online persona. People often assume that I live in their country, or that I am their age or attribute me with any other form of similarity they are looking for. With this, Ambivalently Yours becomes less of a reflection of my personal self and more of a representation of the ideas behind the work; she is my more daring and open alter ego.

Buzzfeed described you as the ‘anonymous artist that illustrates your inner feminist monologue’ what do you think makes these works so accessible to so many?

We live in a world that loves defining people and putting them into categories that never quite fit right, whereas my drawings unapologetically celebrate being flawed, being emotional and remaining undefined, which I think is something a lot of people can relate to.

What do you hope those who see your works will walk away with?

My hope is that my illustrations will inspire people to be unapologetic about their emotions and feminist beliefs by giving themselves permission to embrace their contradictions and decide for themselves how they want to be defined.

Your blog has turned into a forum of support and advice, encouraging people to submit their own ‘ambivalence’ as well as showcasing your illustrations. How do you see these two elements working together?

There is a huge support system for women and by women that exists online, especially on Tumblr, so this is not a format that I invented, but rather something that my work sort of mutated into as it adapted to it’s online environment. What it really boils down to is empathy. The act of reblogging is in itself an act of empathy. It is a way of saying: “Yes I get this” or “I feel this way too.” People began writing to me because they could empathise with my drawings, by responding to their messages with drawings I am acknowledging that I can empathise with them too. The drawings become an expression of that empathy, often illustrating things that words alone can’t.

What has been the biggest challenge in creating your work?

Self-doubt. I worry a lot about what I do, I question why I do it, which is important, but can also be paralysing at times.

What are your plans for the future of Ambivalently Yours/your art?

Right now, I am doing an artist residency at the Centre for Contemporary Arts in Glasgow, Scotland (cca-glasgow.com/programme), until the end of June. I’m calling the residency a 91-day drawing marathon, and my goal is to attempt to respond to as many questions, comments and drawing requests as possible (I currently have over 450 unanswered messages in my inbox.) I am also taking this opportunity to question and reflect upon the motivations and influences behind my work on my sister blog: 91daysofdrawing.tumblr.com

After this residency I’d like to present my work as Ambivalently Yours in other contexts and formats, rather than just online. I’d like to see how the work changes by turning into a book, a short animation or a gallery exhibition.

You can check out Ambivalently Yours’ illustrations here: