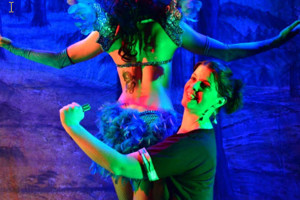 ‘Becoming Bette’ is a one-woman show by artist and performer Elizabeth Scales. Hailing from Brisbane, she brings her show to Melbourne for a pre-Fringe festival viewing. Held at the Butterfly Club across the weekend of the 10th and 11th of September, Scales’ viewing was a cozy and intimate one.

The show is a semi-autobiographical story of a girl and her longstanding dream of becoming a diva. Scales reinvents the concept of the standard one-person show through the breaking of the fourth wall and the use of different forms of multimedia to make for a bizarre, if not humorous, experience.

Opening with the juxtapositions of beauty between herself and a projected onscreen performer, Scales mocks the societal standards of beauty currently in place through the use of self-deprecating humour and a monologue littered with rhetorical questioning of such conventions. Questioning the nature of what it means to be a woman, this underlying political tone is also brought to light through the reclaiming of the gendered use of ‘diva’ – Scales brings the audience into the mindset of a girl obsessed with performing and the dramatic arts, and through this lens, the negative connotations of ‘diva’ are reframed and appreciated.

From the outset, the extent of Scales’ control over both the stage and the audience is clear – her presence is amplified and keenly felt through the small crowd and venue. Audience interaction is heavily incorporated and used, to a thankfully responsive crowd. Reveling in slapstick humor and clever physicality, Scales takes command of the stage; through this there is a metaphorical reclaiming of female space both within the world of performing arts and out of it.

At times, her 45 minute show felt like an arduous journey, almost confined to the typical linear timeline of the wearisome life of a high school kid. Much of the humour was at the expense of her high school identity – it was funny and satirical at first, yet grew tiresome as the show wore on. She included awkward Addams Family references in an attempt to connect with the audience, and I could not help but feel mean spirited when laughing at the Pugsley Addams attribution afforded to her primary school self.

Despite this, Scales’ ability to unabashedly incorporate the audience into her show proved to be ultimately admirable and unique. She closed her show with an exaggerated dance number and lead an audience sing-a-long that brought with it a sense of closure that wasn’t expected, but nevertheless appreciated.