review: women on the verge 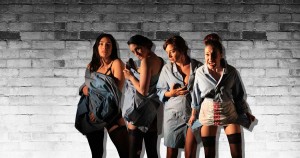 The play Women on The Verge produced by the Bridge (Teatro Latino) Theatre company demonstrates both subtle and explicit gender inequalities in society. Directed by Jamie Wilson Ramirez, the production is based on four monologues written by Dario Fo and Franca Rame during the 1970s – 1980s.

The adaption brings slight changes to the performance, such as adding cabaret and tango style dance. The four monologues follow the stories of a woman locked in a room and abused by her husband, a sex worker who sets a building on fire and finds herself in a psychiatric ward, a woman who was horrifyingly raped by a group of men, and a factory worker trying to manage looking after a baby and a dissatisfying marriage.

All four monologues were performed exceptionally well, managing to be both humorous and heartbreakingly confronting. Though seeming displaced from each other at times, they were united through the cabaret breaks between each monologue and the continual theme of exploitation towards women. The choice of cabaret pivoted against such a politically driven theme seemed to be deliberately chosen, highlighting the sexualisation and objectification of women. The contrast of the cabaret performances with their monologues reinforced that women are more than their nakedness, turning the theme of inequality directly on its head and questioning the audiences own part in these issues. It was cringing when their cabaret performances suddenly turned to shrilling screams, but this served well to represent the toll objectification takes and the internal horror women are accustomed to.

The first two monologues offered very insightful performances. The first, performed by Maria Paula Afandor, showed the control and abuse a housewife experienced by the hands of her husband. The second, performed by Camila Palacios, exemplified the degrading exploitation of a woman’s sexuality. Both reflected on the cycle of abuse and the way that normalised inequalities in society perpetuate mistreatment.

Particularly of note was the third monologue, performed by Samantha Urquijo-Garcia. The confronting rendition of Haddaway’s ‘Baby Don’t Hurt Me’ was mesmerising and painstaking. The costume change was well suited and del Prete’s raw and natural acting skills while recounting the sexual assault made this even more impacting. The moment when she realised the rapists had been pulling on her hair was particularly moving, reinforcing the shock and disassociation she experienced. It did well to subtly confront the complex humiliation sexual assault survivors often experience and the difficulty in reporting to the police. During its rendition, the scene felt all too familiar to the violence that is often experienced by women, but rarely openly spoken about. When I found out that this scene was based on a real event that happened to Franca Rame in 1973, I was not surprised. This is a topic that is all too often skimmed over, and its inclusion was a highlight of the play. Although difficult to digest, it gives a voice to the many women who have experienced this level of violence and abuse.

While the third monologue was uncomfortably confronting, the next was humorous and energetic, yet similarly relatable. The pressures placed on women were exemplified well by actress Serena del Prete, showing the expectations on women to be the homemaker while managing work, and the lack of appreciation often experienced from our partners.

The use of Latin throughout the show was a worthy inclusion. It did well to personalise the stories and to have the audience immersed in the world that was being presented. It also united these themes globally, exemplifying that these are not simply issues for an Australian audience, but rather an issue of inequality all over the world. While the original monologues were written in the 1970’s, the four renditions that were performed demonstrate that these issues of inequality and abuse have persisted into modern day society.

By the time the fourth monologue concluded, I was so absorbed that I could barely believe the show was over. It seemed I was not the only one, with the audience loudly thundering in applause. Although performances of Women On The Verge concluded on the 15th of January, make sure to keep an eye out for future performances by The Bridge Theatre Company. If their future performances are anything like this one, I would not give them a miss.