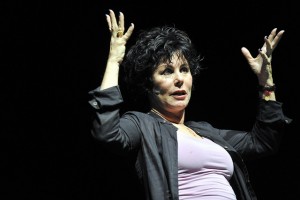 My current thesis was once described by a kindly reviewer as like ‘watching somebody psycho-analysing themselves,’ and I would call that a pretty accurate observation of my mode of research. It is an intense picking apart of ‘me-ness,’ that is the well-trodden reflexive testing ground of the mentally askew. My research considers ways that trauma finds expression in the work of artists, and comedians are no exception.

If you’ve ever wanted a to take a crash course in neuro-psychology and were too lazy to read the books yourself then Ruby Wax’s show Sane New World, playing at the Melbourne Arts Centre until this Easter Sunday, is for you. It is also a hell of a lot cheaper than a chat with an actual therapist and probably a whole lot funnier.

In Wax’s fast food version of evolution, mind mapping and neural imaging, you get the undeniable pleasure of watching someone else pull at the threads of their own sanity and it is really quite comforting; from the arena seats it’s so much easier to watch the gladiators clobber each other. It is this critical distance that Wax brings the show back to again and again. A main undercurrent of Wax’s set is around learning how to break from the hyper-vigilant tension that was wired into our brains at the beginning of the evolutionary chain. Activated in our modern lives by a text message beeping, lights flashing, computers crashing, and any manner of turbulent news headlines, our brains are fooled into thinking we are in perpetual danger.  We are hard-wired for anxious ‘horizon scanning,’ constantly on the alert for the dangers that signal to the amygdala it is time to send out waves of cortisol to keep us pumped and primed for predatory attacks. Only, what happens in our minds when we’re not actually about to be eaten, but we’ve just heard the ‘ding’ of a text or email arriving for the hundredth time today? As Wax asks, ‘why do I need to know if there’s a beached whale somewhere on the other side of the world. What am I gonna do,  fly over there and rent a tow truck?’

The show is a therapy taster, replete with Wax lolling about on stage atop her own plush couch, where she reminisces about psych ward trips, manic spending sprees and ill-advised stints on reality television — all highly amusing with the safety of distance. Wax rakes herself over the coals of shame, ego-lust and narcissistic reptilian fervour, but thankfully the show is neither a sob story nor a redemptive moral tale. Without lecturing, but rather delivering the information in easily digestible pop-psych sized chunks, Wax makes no claim to having the answer to ultimate mental well-being. Which is lucky, as anyone who knows a thing or two about the brain understands, because nobody really does yet.

What Wax offers is a chance to laugh at the pain and suffering that comes with depression and anxiety, and in doing so she normalises it. Seeing Wax on stage now, the hyper-manic, borderline aggressive energy that epitomised her early television career becomes painfully clearer as the ‘filling up’ of space of an anxious individual who is afraid they are the boring, frumpy fraud in the room.

What has replaced that energy is a much deeper thoughtfulness which brings about quite a generous space for the audience in Wax’s private world.

If you’ve already got an above average knowledge of current psychology or neuroscience, its safe to say you might not find anything new here beyond the laughs; but if you’re feeling nuts, anxious, confused, depressed and/or completely bonkers and you’re too scared to leap into therapy, then this show has a lot to offer you. The best part is that if you need to, at the end of the night you can still pretend that all you were interested in was a bit of light comedy: the perfect ruse.