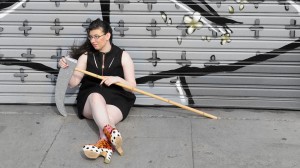 Two weeks ago I got my first tattoo. When my dad found out, he asked if I was drunk, very loudly, down the phone.

Honestly, we’re British, so naturally, even though I know that my dad doesn’t like tattoos, I assumed that he’d just never ever bring it up, because why argue about something when you can just ignore it? But bring it up he did, and he had a lot to say. Mostly the word ‘disgusting’ over and over again, and how seeing people with tattoos makes him want to vomit.

I knew that he didn’t like tattoos, but I didn’t realise how angry this conversation would make me feel. Suddenly, my tattoo felt like an accidentally feminist action. My adamant feminism is a direct result of my upbringing. I know that in his mind, my dad believes in my agency over my life decisions, and agency over my own body, but suddenly, my tattoo brought to light the difficult conflation between this belief, and the reality of direct action. I’m supported without question in my career choices and penchant for increasingly adventurous travel, but heaven forbid I mark my skin; an action that is literally one hundred percent cosmetic.

Getting a tattoo was a big deal for me. A year ago I had a mental breakdown. My mental illness means that sometimes I feel apart from my physical self, and sometimes I feel betrayed by that same self. If my body’s chemical reactions betray me, how can I feel safe within it? Part of my healing process has been to work on my upcoming Fringe show, and part of my work on my upcoming Fringe show has been to face my fears and to take back my own space in the world. A tattoo hit both of these points. I beat my belonephobia (fear of sharply pointed objects) and physically reclaimed my body. A body that hasn’t felt like it belonged to me for a few years now. Additionally, it’s beautiful. I looked in the mirror and felt genuinely beautiful and powerful, a feeling that eludes many women far too often.

My show is called It’s My Funeral and I’ll Throw Glitter if I Want To and it’s a comedy about mental illness and the fear of dying alone (along with my numerous other fears!). It’s both my determined effort to pull off my funeral how I want it to go and also a celebration of life and my own power. With glitter.

One of the reasons that I love performing is that I regain control over my constantly politicised body. Theatre gives me the space, freedom and safety to become anything I choose to become. I can be brave. I can be funny. I can be weak and tender and broken and powerful all at once because it is my performance, my stage, my spotlight and my body. I can become the sharply pointed object I fear. I can carve myself into my point onstage, and now I have carved myself into my point offstage as well. I am not beholden to my body but rather my body is beholden to me.

Isobel Marmion is a storyteller, theatre maker and avid traveller/adventurer. She is currently working on her upcoming Melbourne Fringe Show It’s My Funeral and I’ll Throw Glitter if I Want To. Tickets are available HERE.