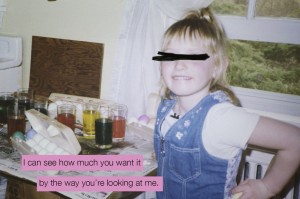 Photography, a medium which can often be in-your-face but also incredibly personal, is the medium in which artist and student Suzanne Brown has decide to use to tackle some huge issues. Her project ‘Were My Pajamas Too Short?’ is a brave and bold artistic venture that sets out to fly in the face of rape and molestation excuses that are so often heard and experienced by victims. I had a short chat with Suzanne about her project, which you can find online here.

Could you first tell me a bit about yourself?

Well, I’m from Lancaster, Pennsylvania, but I’m currently going to school in North Philly. I’m working towards my BFA in photography. I have a background in Chinese Intelligence and  a passion for all things containing caffeine. I am constantly trying to express myself through creating things.

What inspired you to start the project Were My Pajamas Too Short?

I had been thinking about it for a few months before I did it, but I was too nervous to actually make them. One of my professors, though (Steve Berkowitz at Tyler!), was incredibly inspiring-at least once each lecture he’d say ‘you’re not really making art unless you’re pissing someone off.’ After hearing that (and hearing that and hearing that), I decided that it didn’t matter if I felt like these pieces were making people feel awkward.

What has been the biggest challenge so far in bringing your vision to life?

Honestly, it’s been everyone’s reactions to it. I’m pretty shy and this project seems to make a lot of people feel awkward. A lot of reactions I’ve gotten are just ‘oh, so you were molested … ?’ or ‘just because you were raped, it doesn’t mean that you need to make other people feel uncomfortable,’ which is not only not the point of this project, but also not completely relevant to the point I’m trying to make. I’m not trying to suggest that anything has happened, I’m just trying to present a different viewpoint to rape culture. 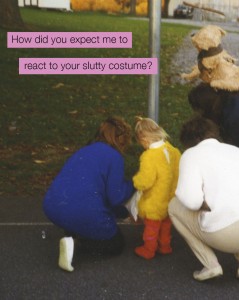 What do you hope your project Were My Pajamas Too Short makes people think about?

I just want those who see it to really think about the effects of rape validations. I hope that putting these phrases next to children really emphasizes that these ‘excuses’ are not ok. The thought of saying these things to children is disgusting, so why is it alright to say them to women?

Why do you think your project is important?

I know it makes a lot of people uncomfortable; I’m glad it does. I think it’s important because while these pictures may seem disturbing, I think that the disturbing factor is what is really causing some people to reevaluate the just how absurd these validations are.

My grandfather, who was a gentle soul, feminist, and artist.

Have you or has anyone you known experienced child sexual abuse?

There are a few people who are very close to me that have experienced childhood sexual abuse.  I don’t want anyone to think that this is all that this series is addressing, though.  I want it to address all sexual abuse-whether it’s involving children or adults.

I’ve started a blog and an Instagram, which I hope gets my work out there a little more. Throughout these next few years at Tyler, though, I just plan to submit my work to anyone who is willing to look at it.  I also hope to mix more mediums. 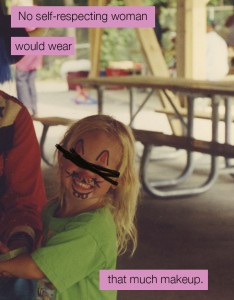