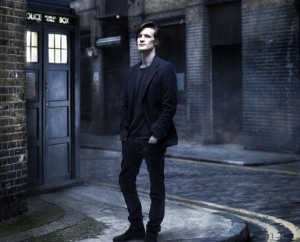 From 1963-2005 Doctor Who held the record for longest running science fiction program. BBC Wales, seemingly unsatisfied with this title, rebooted it as a fully fledged popular family program, dragging it from the depths of British cult status. Only five years on Doctor Who has reached a new era. 2010 brought the moment that much loved Tenth Doctor, David Tennant (Harry Potter and the Goblet of Fire, Casanova) doffed his light brown trench coat and passed the Sonic Screwdriver to ostensibly unknown Matt Smith (Party Animals, The Sally Lockhart Mysteries) Given that Tennant has become the face that defines Doctor Who to many, he has left big sneakers to fill. It’s a breath of fresh air to learn that Smith is well up to the task.

The plot remains the same as previous seasons. The Doctor, an alien from a race called ‘Time Lords’ travels time and space in his TARDIS, a space ship shaped like a 1960s police box, which is “bigger on the inside.” As season five begins, the newly regenerated Eleventh Doctor finds himself in the company of Amelia ‘Amy’ Pond, (Karen Gillan) a red-headed, strong-willed, close-hearted young woman, who has more history with The Doctor than he can possibly imagine. Amelia’s boyfriend Rory (Arthur Darvill) also accompanies them for a time, as does recurring character River Song, played by Alex Kingston. (ER, Hope Springs) Head writer Steven Moffat (Coupling, Jekyll) is well known for his clever use of time and complex continuing story arcs, a joy of Doctor Who. In every episode is a relevant snatch of conversation or an image that will unexpectedly pay off in future stories.

Contrary to what one might think, in no way is Smith a copy of Tennant. He doesn’t attempt to emulate or channel his predecessor. Where Tennant ranted passionately, filled with some dark rage and guilt, Smith rambles amiably and is wont to snap with a more superficial anger, fuelled no doubt from being very old and far too smart for his own good. There is something enchanting in Smith, the youngest actor to ever portray the character, playing a 907 year old man. He looks so much like The Doctor, attractive in a strange way, all big chin and twinkling eyes, and impossibly youthful with his untamable quiff of hair, bow legs and  twitching hands, even when clad in bow tie, braces and tweed. However, on the turn of a dime he becomes ancient and wise, capable of feeling deep emotion. At once he is seeing the world with both the fresh eyes of youth and hopeless, crushing cynicism of a complex life.

His companion Amy is a triumph. In the first episode you find yourself asking, ‘Can The Doctor travel with a seven year old girl?’ and desperately hoping the answer is yes. New-comer and cousin of Karen Gillan, Caitlin Blackwood magnificently plays Amy as a child: the little girl lost, praying to Santa (it’s what all the cool kids are doing) and dreaming of a Raggedy Doctor who promised to take her away.  She is stubbornly aloof about things that go bump in the night, and obviously wounded when her ‘imaginary’ friend doesn’t return when promised.

Fourteen years later and 21 year old Amy is a companion we’ve never seen in Doctor Who before. From 1963-1989, the Doctor’s companions were all twisted ankles and yelps of ‘Help Doctor!’ If ever a strong woman was introduced her initial story line would soon change to damsel-like helplessness, or an undignified writing out. Heaven forbid any romantic interest between Doctor and his female companions. This has changed somewhat in recent years with hand holding and furtive kisses, not to mention hinted ‘love’ from The Doctor toward a companion. Season Five brings to this tentative ‘children’s’ show the concept of desire. Amy, after facing near death with the Doctor and realising he is actually a bit hot, attempts to seduce him. She doesn’t fall in love with him: there is no unrequited pining for Amy, she simply wants an unabashed tumble.

After so much speculation as to the future quality of Doctor Who, we are presented with a gloriously life affirming show, in turns comedic, exciting, and morose. Whether an avid sci-fi lover or not, this is an immediately accessible program with so much to be enjoyed by viewers of all ages. We see the return of the Daleks, Weeping Angels, crashed spaceships, alien planets and historical figures all over the 13 episodes. One particular episode featuring Vincent Van Gogh, and written by Richard Curtis (Love Actually, Four Weddings and a Funeral) tackles the dicey subject of Van Gogh’s mental illness and is crushingly beautiful.  If anything, season five has simply reaffirmed viewers to the fact that yes, The Doctor is definitely in.