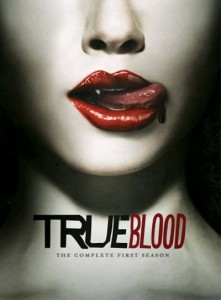 Not just another Twilight imitation, HBO’s True Blood has sucked in a following of it’s own. The series follows southern belle waitress Sookie Stackhouse and her mortal friends, as they come into contact with members of the undead vampire community that have recently revealed their existence to mainstream America. A clever premise, with the promise of plenty of sex, story, and the supernatural. For those coming late to the party, or still wondering if it’s worth jumping on the bandwagon, I offer this review of season one to help you make an informed decision on whether to watch.

When I hear that a show is produced by HBO, I immediately have high expectations. The premium cable channel is notorious for its high production costs, and the subsequent high quality of its shows. HBO spends money on good actors, meticulous sets and costumes, and art direction worthy of Tom Ford. True Blood is no exception.

The cinematography and art direction is equally stunning. The (Emmy nominated!) opening credits are probably one of the most beautiful things this humble TV-addict has ever seen.   A confronting mix of religious imagery, wild animals, southern hick culture, sexually suggestive bar dancing, and death and violence, it perfectly encapsulates the multitude of themes explored in the show itself. Add to the mix the deliciously country “Bad Things” theme song by Jace Everett, over-saturated colours, and sublime speed editing, and you’ve got a truly masterful title sequence.

Oh… and the rest of the show after the opening credits is great too. Exactly like the title sequence, True Blood uses over-saturated colours, mood appropriate music, character driven costuming and the general loveliness of the Louisiana countryside to create visually stunning television.

But is the plot up to scratch? Or is this just another bit of Twilight inspired vampire-porn?

I’d say both. True Blood breaths new life into an undead myth; having Vampires as a newly outed minority trying to live normal lives in modern America. The politics of the hierarchical Vampire world, as well as hints of race politics and homophobia in the American south, make for good episodic plots as well as meaty overarching themes. The murder mystery builds well over the season and the conclusion is surprising but not completely left of field. With a promising cast of sidekicks, new takes on old magic, and good use of cliffhangers, True Blood is entirely watchable.

However, there is something lacking in the first season. For a show that is 80% romance novel, the romantic entanglements in the first season are handled poorly. The true-love-at-first-sight attraction between Bill and Sookie is poorly explored and rushed to graphic consummation (which leaves me wondering, “if they’ve already had sex, what are they going to do next season?”).  Tara’s unrequited love for Jason is abandoned too early, before it really bares fruit, and a Tara/Sam subplot is similarly dropped without much drama.  Or even exploitation of the possible Tara/Sam/Sookie love triangle. Sookie’s obvious “true love” with Bill makes it hard for us to ever really buy an attraction to Sam, which takes a lot of the sizzle out of the would-be Bill/Sookie/Sam triangle. All this romantic tension wasted! Where is my supernatural soap opera?

True Blood is notorious for it’s risqué sex scenes, but the more they’re used the less confronting they become. Good sex scenes add to the plot, but there is quite a bit of graphic bonking in True Blood that is over the top and unnecessary. In particular, Jason’s V induced uber-erection seems like a cheap attempt to add more innuendo. Sex sells, but it sells to the lowest common denominator, and HBO can do better.

Overall, though, the first season of True Blood is good television. Visually stunning, great acting, interpretive but faithful use of mythology, and just enough plot and politics thrown in to keep it moving. If you’re on the fence about watching, give the first season a taste. It might not suck you in, but it’s a good way to pass the time. And then there’s the promise of a better second season to look forward to…