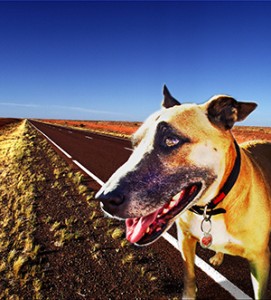 Presented by Mary Ann Butler and ARTBACK NT, Highway of Lost Hearts is a one-woman theatre production that explores love, loss and the process of grieving. Written and performed by award winning Darwin based playwright Mary Anne Butler and directed by Lee Lewis, the production is as humorous as it is gut-wrenching and infused with moments of magical realism.

Highway of Lost Hearts tells the story of Mot as she embarks on a cathartic and sometimes mad road trip from Darwin to Sydney following the death of a friend. Accompanied by her faithful Dog, Mot is on a mission to find her heart, which, although initially thought to be lost as a result of the tragedy, has actually been missing for some time now. During this journey Mot and Dog travel through the heart of the Australian outback; Broken Hill, Coober Pedy- all the dust speckled towns that evoke visions of Australia’s Red Centre. Along the way Mot meets all kinds of people from truck drivers in bars to racists in supermarkets and hardened creeps in petrol stations. She soon realizes that her predicament is not unique- everyone is missing something, searching for some part of themselves they would like back.

Throughout her journey Mot has sudden moments of realization, often in the most mundane situations and encouraged by Dog, who not only talks to Mot but serves as an anchoring force, dragging her back from moments of deep depression and guiding her towards hope. New hurts open up old wounds and Butler makes use of flashbacks, interspersing the story with not only moments of the recent tragedy, but salvaged up memories of older tragedies that Mot has, perhaps, not finished grieving.

Personally, I found the concept of searching for one’s lost heart to be a little contrived, however the premise is saved from cheesiness by the wryness of Mot’s character and the subtle underplaying of drama within the entire production. Moments that veer towards violin-worthy are suddenly dragged back down to earth with a crude observation or humorous quip. Many of Mot’s experiences are darkly funny yet infinitely relatable. We have all been where Mot is at some time in our lives. The relationship between Mot and Dog is also a highlight and plays out beautifully; at times capturing the audience’s imagination and suspending reality, and at other times breaking an uncomfortable mood with the simple humour all pet owners can appreciate. Mot’s interactions with Dog also reflect softer aspects of her character, creating depth and rendering her more accessible to the audience.

The sound, lighting and set design- by Panos Couros, Sean Pardy and Kris Bird respectively- were very well done, however I did sometimes find the use of visual imagery, such as photos and video, unnecessary. Whilst their use makes sense in hindsight, as I now know that they are from the real-life journey taken by Butler which this story is based on, I found them to be distracting at times. The simple yet clever use of light and sound created mood and facilitated audience immersion much more effectively.

Highway of Lost Hearts is a great piece of theatre, written and performed, somewhat ironically, with more heart than many plays I have seen. Whilst steeped in tragedy, it is  surprisingly funny and very relatable.

Highway of Lost Hearts is showing at The Street Theatre in Canberra until August 30. Tickets are $35 standard/$32 concession.

One thought on “theatre review: highway of lost hearts”