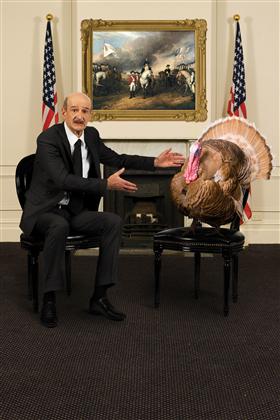 Growing up, I heard a lot about famous Australian actors. Older family members have a tendency to reminisce about what they perceive to be ‘the better days’ and television shows were apparently better when my middle-aged relatives were younger. For this reason, I vaguely recognised Garry McDonald’s face (although not his name) when I saw it on the posters used to advertise November, The State Theatre Company’s latest production. However, it wasn’t until one of these relatives reminded me who he was that I actually knew who McDonald was; famous and talented as he may be, he just wasn’t (and still isn’t) particularly relevant to my life. And as witty and entertaining as it is, I feel the same way about David Mamet’s November.

Directed by Adam Cook, November takes us to President Charles Smith’s (McDonald) Oval Office. A loud, ineffectual and detested leader, Smith is about to be ousted at the upcoming election. His advisor, Archer (Peter Michell), tries to help the President to accept his fate, and also attempts to control the disorder that surrounds him. In an attempt to raise money to help his campaign (and to pocket if he loses), Smith deals with a representative of the turkey board (Michael Habib); he also calls on his lesbian speech writer Clarice (Barbara Lowing) to sway the public in his favour.

Much of the play’s humour comes from satirising American politics and the American lifestyle. Of course, a lot of this is transferable to Australian life, but even the small amount that has little comparison to Australia is enough to make some of the jokes fall a little flat. That being said, my impression of the play’s humour and its occasional failure probably comes from my age; being on the younger side of twenty means that as much as I’d like to profess political knowledge and understanding beyond my years, I just don’t know enough to fully understand the particulars of some of the gags. The target audience is certainly aimed nowhere near me, which was reflected in the median age of the audience (at least on the night I attended).

Regardless of my own shortcomings as an audience member, it was interesting that the program contained a small glossary.  I didn’t purchase one until the interval, and reading the definitions within made more sense of some of the jokes I’d missed in the first act. The fact that there are terms within the script which are seemingly only known to residents of the United States hints at how generally American the script is; to me, a comical play such as this should not need a glossary to be understood, and the inclusion of one in the program indicates that some of the script just cannot be translated to other countries.

What can be understood here in Adelaide of this American play about American politics is undoubtedly amusing. I can now not only recognise McDonald but attest to his comedic talent, and Michell makes a clever offsider. Habib and Lowing are similarly capable in their respective roles, both exasperated and irritated by their President’s actions. Jason Chong is slightly less believable as the Micmac leader angered by Smith’s actions, and his confusing portrayal is not helped by the unrealistically bright blue and orange feathers adorning his headdress (the only fault in Victoria Lamb’s otherwise fitting set and costume designs). Importantly, the cast’s American accents are convincing and are retained throughout.

November’s success in Adelaide is dependent upon the audience drawing parallels between America and Australia, and there certainly are many to draw. However, there are also enough differences to make this play a little irrelevant; again I refer to my age, but this is not a production likely to impress many young people. It takes a witty look at politicians without leaving any lasting impact, and after the long set up in the first act, achieves a farcical representation of life in the White House. There are enough one-liners to sink a ship, and enough uses of the ‘f’-word to destroy any vestiges of innocence I may have had. Once it hits its stride, November is an amusing and entertaining play that unfortunately remains hard to relate to and hard to care about.

November is showing at the Dunstan Playhouse from May 2 to 22. Tickets from $29 from Bass. Show runs for two hours including interval.

One thought on “theatre review: november by david mamet”