The first thing you’ll notice about Anton Chekov’s Three Sisters (once the blinding floodlights are pulled away to reveal the stage) is the set. It is magnificent, and it is beautiful. Co-designed by Gavan Swift and director Adam Cook, the pair has created an aged and damaged manor, complete with paint peeling off the walls and mounds of dirt and debris. Coupled with the myriad of people who walk around the stage with torches, clad in all weather clothing, inspecting their surroundings, we understand the idea that while the people on stage are supposedly excavating the house, the play itself excavates a story. A story of love, life and family. The question is: does this excavation metaphor work?

The three sisters of the title are Irina (Kate Cheel), Olga (Carmel Johnson) and Masha (Ksenja Logos), who live in the once-grand house in a Russian town. Born in Moscow, they long to return to the city, craving a more vibrant, entertaining life. Much of their company comes in the form of the soldiers who reside in the town, including the quietly reliable Baron Tuzenbach (Renato Musolino) and the idealistic, newly-arrived Vershinin (Peter O’Brien). Stuck in a boring town, the sisters contemplate the idea of love and marriage and the value of working, and question what legacy, if any, they will leave. 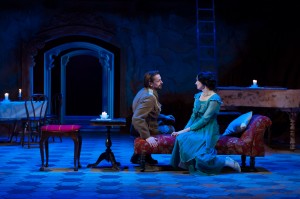 This is State Theatre Company’s largest production for the year, with a cast of fourteen and a running time of over three hours. In many ways its size gets the better of it. The cast features a number of wonderful actors, many of whom – such as the ever pleasing Nathan O’Keefe – are relegated almost to bit parts. Even with an energetic opening act, the considerable length of the play caused me to lose focus as the night wore on. That being said, the cast should be applauded, with Michael Habib’s lively Chebutykin and student actor Cheel’s desperate Irina more than making up for Nadia Rossi’s slightly contrived Natasha.

Cook’s production raises many questions. We are told that the eldest of the sisters, Olga, aged prematurely, but why cast Johnson, who looks old enough to be the sisters’ mother? And (most curiously), if Three Sisters can play “like an urgent, contemporary drama” as stated in the director’s note, why set the play in an archaeological dig? Having to pull an old story out of its buried home, however beautiful it may be, only reinforces the antiquity of this early 1900s play – and the presence of the workpeople simultaneously on stage with the residents of the house adds a layer of unnecessary confusion. The two worlds do not interact; the workers merely observe, or type at a laptop, or wander around turning modern day lights off – unnecessary and puzzling actions. If Three Sisters is so contemporary, the story would only benefit from a modern setting.

Three Sisters is the type of play you can watch and enjoy, laughing at the Cossack-style dancing and the bumbling, deaf townsman Ferapont. Unfortunately, it is also the type of play which you can question, and it is the questioning which causes disbelief. If you can accept the necessity of literally mining a town and a house for a story, then perhaps you can believe the relevance of this story to us today. As it is, Three Sisters is enjoyable, although a little long; but, as much as the dirtied stage would have you believe, it isn’t groundbreaking.

Three Sisters plays until August 28 at the Dunstan Playhouse. Tickets $29-$49 at Bass. Three Sisters will have a Red Carpet event on August 17.

One thought on “theatre review: three sisters by anton chekhov”