Growing up in Hobart in the ’80s and early ’90s, Melbourne Designer Alexi Freeman did not embark on a conventional journey into Fashion Design. His childhood was ‘as far away from fashion as you could possibly get’ and ‘the closest [he] got to a fashion icon was whilst watching Rage – when Axl Rose married Stephanie Seymour in the November Rain film clip’. Yet Freeman was always creative, feeding his active imagination with the work of 20th century artists like Gustav Klimt, Egon Schiele and Léon Bakst. Freeman says that although ‘fashion really didn’t come into the equation until much later’ he always wanted to pursue an artistic career.

Freeman studied printmaking and sculpture at art school, disciplines which the ALEXI FREEMAN line continues to reference. When a PhD candidate mentioned that she could picture Freeman ‘running an Haute Couture house in Paris’ he set off in a different direction, focussing his attention on fashion design. Whilst working as a costume designer in the early 90’s, Freeman launched his own label and through a series of incarnations, it became ALEXI FREEMAN, the women’s wear line gaining recognition from The Australian Ballet, The Design Files and Susie Bubble’s cult fashion blog Style Bubble, among others.

Freeman’s artistic beginnings can be clearly seen in all his collections, which experiment with form and texture and feature ornately detailed prints that recall of Rorschach-style inkblots. His pieces are vibrant and refined, as at home in a gallery as they are on the runway.

Freeman is always looking out for new inspiration though he prefers not to reference contemporary fashion, instead turning his eye to Art Deco styles of the 1920’s. He says ‘the notion of postmodernism is something he continually refers back to.’ Freeman manages to synthesise layers of inspiration into pieces that speak to both the viewer and the wearer through careful, striking details of colour, print and silhouette.

The most recent ALEXI FREEMAN collection, Python, presents intricate prints that appear simultaneously electronic and organic, shot through with fresh neon shades. The garments play with weight as Freeman employs everything from sheer mesh to leather, adding a distinctly tactile dimension to the pieces. ‘I love working with luxe natural fibres like silk jersey, merino wool [and] cashmere…I also like to mix these up with man-made fibres like nylon, lycra, lurex and mesh’ he explains. 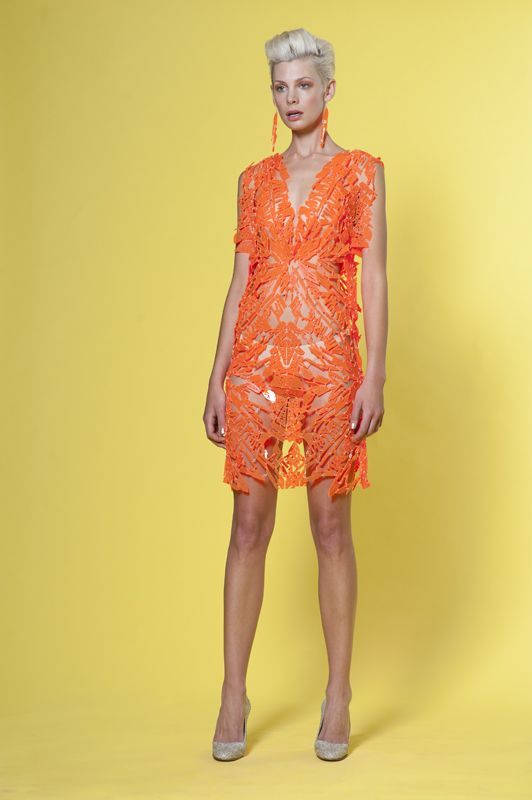 Freeman’s greatest triumph is his more experimental pieces, like the Relic Dress, which challenges the distinction between a sculpture and a garment. The piece is constructed from laser cut acrylic, and ‘like a very elaborate puzzle consisting of many thousands of pieces’ says Freeman, connected by small jump rings, forming decorative armour that hangs from the human body like a painting on a gallery wall. It is such finely wrought detail that defines Freeman’s work, reminding us that he is not simply a fashion designer, but a sculptor and an artist too. The vision behind the Relic Dress, Freeman explains, was a ‘somewhat post-apocalyptic vision of Hawaii, with the motifs stemming from palm fronds and the colour a nod to lava.’ Freeman is able to re-interpret his original inspiration into something new and challenging, and certain to generate discussion and wonder. Recently, he has designed an increasing number of such exhibition style pieces and ‘aims to focus more on that type of really experimental work in the future.’

Costumes designed by Freeman for The Australian Ballet

As part of the Australian Ballet’s 50th anniversary, celebrated in 2012, Freeman created a range of costumes for Gideon Obarzanek’s re-imagining of Swan Lake titled There’s Definitely a Prince Involved. The nude bodysuits Freeman created featured sharp anatomic prints in both black and white – a nod to the Ballet’s exploration of light and darkness. They appeared an extension of the dancer’s own bodies, the fringe that trimmed their limbs danced with them, creating the illusion they could soon take flight. This powerful visual feast typifies the ALEXI FREEMAN brand: combining fashion and art in an electrifying, remarkable way.

You can find Alexi Freeman on his website or visit the studio (by appointment) at 66 B Johnston St, Collingwood, Victoria.

Threads is a series profiling emerging designers in Australia. Whether your work is classic, avant-garde or just plain cool, we want to hear about it. Get yourself out there! Send an e-mail to [email protected] We’d love to get to know you and your work.