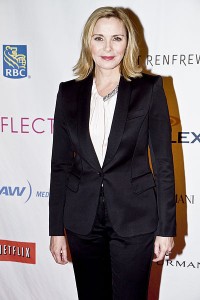 After an eight-year hiatus, Kim Cattrall is finally returning to the small screen to play the headlining role in HBO Canada’s Sensitive Skin. Based on the 2005 British series of the same name that starred Joanna Lumley (Absolutely Fabulous), Sensitive Skin is a black comedy about a married woman coming to terms with the inevitable effects of ageing.

Cattrall, best known for playing the perpetually-single sex-crazed Samantha Jones in Sex and the City (SATC) says her character, Davina Jackson, is nothing like Samantha — and that’s what made her want return to television full-time. Cattrall says she was offered several Samantha-type roles after SATC ended in 2004, and that she could have gone on to play Samantha Jones for the rest of her life if she wanted. In an interview with Canada.com she said, ‘I loved playing that character … but my trajectory since SATC has been to take different kinds of roles. Before it I had a varied career and I wanted that after it, and I also wanted to keep learning.’

Although she received tremendous success later on in her career playing Samantha in her 40s, Cattrall says women her age are sadly lacking on television. The well-documented age bias of TV and film producers means that we really see women over 50 on our screens, and an actress who turns 35 can expect a significant reduction in opportunities. For Cattrall, a story about a 50-plus women that dealt with the difficulties of ageing was so special that she signed on as the show’s executive producer.

Cattrall said, ‘Having no programming for you, it makes you feel invisible. I want to provide entertainment for people like me, in the sense of, I want a good story. I want someone I can root for. I want a protagonist who’s my age, who has a lot behind her, but who’s going through certain conflicts. … We’re talking about middle age, but we’re actually talking about life.’

She hopes her adaption of Sensitive Skin will encourage broadcasters to commission more shows with strong roles for older women.

The six-part series sees Davina, a former actress and model who has been admired and objectified her entire life. She’s been married to the same man for over 30 years, and now that she’s in her fifties she works part-time in an art gallery. Her life, career and marriage have become stagnant, so in her struggle to reinvent herself she drags husband Al (Don McKellar) to start a new life in city. In a slightly-later-than-midlife crisis, she and her husband Al downsize from their middle-class suburban home in one of Toronto’s most affluent neighbourhoods to a condo downtown to feel hip and relevant again.

Davina is reluctant to age; the first episode reveals that she’s been buying hormone supplements for the last decade in an attempt to ward off age’s cruel effects. But her struggle with ageing is not a case of simple vanity: it’s about a fear of death, a fear of wasted life and time running out.

Sensitive Skin is currently only available on HBO Canada, with no word yet if it will be picked up for a second season. We can only hope that it survives: we need more women like Davina on our screens or we’ll never learn how to get over our own aging fears.