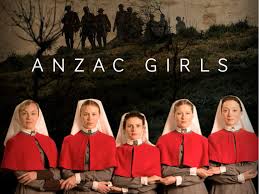 It is hard to deny the somewhat mythical significance of the ANZACs and Gallipoli in popular understandings of Australian history. The connotations of mateship, bravery and nationhood that are all tied up with the ANZAC figure seem predominantly masculine, but how often do we hear about female ANZACs? It was not just men who experienced the horrors of the First World War, a fact reflected in the ABC’s new drama series, ANZAC Girls.

ANZAC Girls is part of the public broadcaster’s extensive suite of programming marking the centenary of the outbreak of the war. Based upon the experiences of real nurses documented in The Other ANZACS by Peter Rees, this series dramatises life as a nurse during the conflict.

In the first episode, we see a group of young nurses from Australia and New Zealand arrive in Egypt. They seem ready for an adventure, but are soon shocked by the terrible reality of their work as the first casualties from Gallipoli arrive. Sister Alice Ross King (Georgia Flood) juggles her duties with burgeoning romance, and Sister Elsie Cook (Laura Brent) is discovered as the wife of former Prime Minister’s son, Syd Cook; Elsie had to sign up under her maiden name, as married women were not allowed to serve as nurses in the army.

In the second episode, some of the ANZAC girls are transferred to Lemnos, a Greek island. Not only are the nurses faced with caring for men with devastating injuries, but they must also cope with a lack of basic facilities and medical supplies. Sickness is rife, and many of those given the chance to transfer back to Cairo take it gladly. Sister Olive Haynes (Anna McGahan), though, is determined to stay and play her part. It is up to the audience to decide whether they would have done the same.

It is particularly interesting to observe how the second episode depicts gender relations during the war. Matron Grace Wilson (Caroline Craig) battles against the male-dominated army system; Colonel Fiaschi (John Waters) is dismissive of her requests for resources and privacy for the nurses, explaining that he would rather not have them there at all. So far, these two actors have given the standout performances of the show, with Craig especially convincing in her role.

The rest of the acting has been somewhat flat at times, which is disappointing given the high standards of local drama on the ABC of late. The script as well as leaves a little to be desired; it often feels forced and there are a few too many token ‘bonzas’ thrown into the otherwise contemporary dialogue. However, the storylines are interesting enough to warrant watching the rest of series, and perhaps some of the other actors will come into their own in the remaining episodes.

Importantly, the show has not painted an overly romantic view of the war: the hospital scenes have been confronting, and the conditions on Lemnos are depicted as hopeless. It is hard to say whether the show will ultimately gloss over some of the worst realities, but so far it has not seemed to glorify war in ways that popular representations are sometimes in danger of doing.

WW1 centenary programming continues a collective focus on this part of our country’s history. Although the people involved undoubtedly deserve to be recognised, some might argue this focus on the war comes at the expense of other stories, including ones that have played out closer to home—those of Indigenous Australians, for example. This year and next, it will be hard to avoid representations of the First World War in dramatic and documentary form. ANZAC Girls is at least bringing us a broader representation of war than young men on the front lines and the occasional shot of young girls at home waiting for letters from sweethearts.

The next episode of ANZAC Girls screens 9pm Sunday on ABC1. You can catch up on iView here, and read more about the show, its background and the women who inspired it in this piece from the Adelaide Advertiser (warning — spoilers!).