we are the ghosts of the future: review 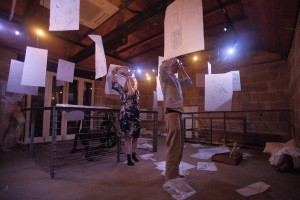 As part of the quirky Village Bizarre festival being held at Sydney’s historic epicentre, The Rocks, there is a captivating theatre production being shown that is unlike any other. We Are the Ghosts of the Future is part performance art, part meditation, part exhibition, and wholly a piece of the jigsaw puzzle that makes up the great history of Sydney.

Presented by Blancmange and 7-On, We Are the Ghosts of the Future is set in the Rocks Discovery Museum, an 1858 sandstone building. The locale is set against a particular date, The 13th of November 1935, which is the day, that local Sydney pilot Charles Kingsford-Smith was declared as officially missing during his trip across the ocean from London to Sydney.

The show opens when the pre-event wait begins to set in. The audience sits in a small courtyard in a narrow laneway tucked behind the buzz and hype of the festival’s markets, food stalls and street performances. We hardly know how or why, but we suddenly begin to file down a stairway into the opening sequence, where we find two women hanging up clothes on a line.

We approach these women on an average afternoon during 1935 and are immediately drawn into the mundane yet aspirational domesticity of their actions, their hopes, and their fears. We are then drawn inside to our stage, a 1930s boarding house that holds a variety of lodgers who are mourning the loss of Kingsford-Smith and are dealing with their own hopes and hardships. We are led up into the cavernous, dusty, and ghostly area of the top floor of the museum. From here, audience members break away from each other, as each piece of action in front and around them draws them in.

The audience stays divided into small groups and at times individuals move away or towards a particular scene. Although this is done as you please, we also have guides that motion us towards sections and corners of this top floor, where we find a “trollop” taking care of a boy with special needs, a police office revealing his homosexual tendancies, and a French women who reflects on her life in Australia.

Halfway through, we are all quietly moved back downstairs to the first floor and are again given free range to walk into the dark rooms of the boarding house. We find a seamstress, an abortion scene, and finally, are led outside to the finale; a humble closing to the otherwise haunting setting of the show.

We Are the Ghosts of the Future was written by seven established playwrights – Donna Abela, Vanessa Bates, Hilary Bell, Noëlle Janaczewska, Verity Laughton, Ned Manning, and Catherine Zimdahl. Each playwright wrote their individual piece and the work was brought together by the binding desire to create a site-specific work rich in history.

I spoke with playwright Noëlle Janaczewska before the show. Noelle explained to me that the group of writers was “originally inspired by the City of Shadows exhibition a the Museum of Sydney, which was a collection of police photographs from the early part of the 20th century.” They were then given a two-week workshop by the “Sydney Theatre Company with Director Lee Lewis and that turned into a very epic sit-specific work called Long Shadows.” Soon after this piece was formed, however, Noelle explains that the “logistics of that proved a bit too daunting” and so that particular work wasn’t followed through. The team was still, however, was “still really interested in a site-specific work and sought something more contained, such as an old terrace house in the inner city and then wanted to focus on domestic life and on crimes that we don’t now consider crimes such as homosexuality or abortion.”

What brought We Are the Ghosts of the Future into a cohesive whole, Noelle explained, was the decision to “set it all on one day, the 13th of November 1935 – which was around the time Kingsford-Smith had disappeared. He just hadn’t been sighted for a few days, and by that day it was fairly likely that he wasn’t going to be found.”

As was proved from the get-go, this work was truly as Noelle explained it would be: “a bit more like an installation and there’s no beginning, middle and end … the audience is invited to wander around and to see bits of the daily life of these people.”

Thus, We Are the Ghosts of the Future is a stunning combination of contemporary and collaborative performance that combines with the historical, structured past of our ancestors. Our coherent history collides with our current troubles and dreams, and we come face-to-face with the question of where we fit into the puzzle.