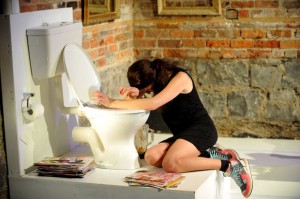 What’s The Matter with Mary Jane? is a powerful and heart wrenching one-woman show that’s been performed in various locations such as Melbourne, Hong Kong, and The Edinburgh festival, throughout its 20-year run. The show and the script have become a benchmark in schools and theatres alike for its truthful portrayal of what it’s like to be a teenage girl living with an eating disorder.

The latest rendition sees Sancia Robinson, the woman whose real-life story is being played out in front of our eyes, as director. The script is written by Wendy Harmer, and Gabrielle Savrone steps boldly into the shoes of Sancia’s troubled years living with anorexia nervosa and bulimia nervosa. With a short run at Sydney Seymour Centre, this latest installment of What’s The Matter with Mary Jane? is being presented as part of a school program run by The University of Sydney and the Charles Perkins Centre, to help school children learn the dangers and uncover the facts about eating disorders.

I had a chat with Sancia before I saw the play. It was quickly evident that Sancia is a determined, passionate, and courageous individual, not only for putting her own life under the magnifying  glass in this one-woman show, but for continuing to advocate for change even years after she struggled with eating disorders. She explained to me, and then Wendy and herself explained in an after-the-show Q&A on the evening of August 5th, that the show is still being performed and they are still pushing for education about eating  disorders because, unfortunately, these disorders have not seen a decline in the past few decades. Today, about one million people in Australia are currently living with an eating disorder, and this number doesn’t look like it’s slowing down.

Sancia described to me the main reason for her starting this project of unveiling what it was like for her to go through these harrowing disorders and the reason for why she’s still pushing for the show to be performed. She told me that once she was healthy after battling her eating habits for many years, she felt as though she had crossed a turbulent river and was now standing on the bank, exhausted but finally on solid ground. However, she looked up and realised that there are a lot of people on the other side who need a hand in getting across.

This imagery made me very emotional; it’s exactly how I feel about my condition. I’ve been living with and battling my depression and anxiety for many, many years. I am just now starting to climb out of the river and almost have the energy to stand up and look behind me, towards the others that need help getting to safe ground. I am on a mission to help others, just like Sancia has been on this mission for the past two decades. It’s remarkable and inspiring to see that she is still standing at the edge of that river bank, still pulling up each new person, one by one, to safety.

The show itself was a breathtaking and incredibly honest hour and a half journey of self discovery. Gabrielle put on a truthful, sometimes quirky, and oftentimes tear-jerking performance. Backed by Harmer’s truthful, informative, and emotional writing, What’s The Matter with Mary Jane? left me feeling like I had just been through an eating disorder myself. I felt tired, a bit sick to my stomach, but my breathing was slowing down and I found that I could find tools in my head that would help me through the rest of the evening, and possibly tools that would be able to help me assist someone going through an eating disorder. I believe this is exactly what Sancia wants her audience to feel; to experience exactly what she went through but then to come out the other side, on the riverbank, feeling okay with the fact that life is not always perfect, and that there is nothing wrong with who we are, what we’ve done, and who we will become. All that matters is that we accept ourselves.

One thought on “what’s the matter with mary jane? review”