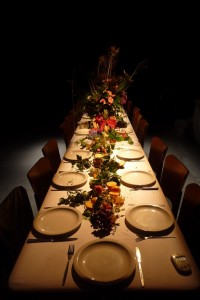 A recent dinner party I attended left quite a foul taste in my mouth. Well, not a literal taste in my mouth. Nothing was wrong with the food, or the drink. Actually, there was no food or drink. You see, the dinner party was not real. But the reality of said dinner party has lurched me into an existential quandary. Have you ever played the game ‘Fictional Dinner Party’? It’s simple. All one has to do is list the five people, living or dead, whom you would invite to your ultimate dinner party. Anyone from all walks of history are invited to come along for a fictitious evening of brain picking, food, and hero worshiping.

The stark fact that they are male, with poor Martha the only female amongst the group, should not enter into any discussion. However, because I am proudly and passionately a feminist, who believes in the equality and the respect of all peoples, there is a discussion. There has to be a discussion. In a world where traditionally the male members of the community have been granted more opportunities than their female counterparts, I need to ask myself the question; does having an all-male line up of career idols and heroic figures make me a bad feminist?

I don’t like my dinner party guests because they are male. I admire them for their writing skills, for their humour, their eloquence and their bravery. All of these traits are achievable without the prerequisite of a penis. I would argue, to an extent, that I am allowed to have these figures are idols without having to consider or defend their gender. Being a feminist means that the gender of my idols should not be a relevant topic of discussion.

But the stark, obvious fact that four out of these five people are male only highlights the fact that women are drastically underrepresented in the literary and media worlds. And I have to be truthful and admit that there have been moments in my life where, career wise and artistically, I have felt a little lost and misguided in my ambitions. The lack of female writers and documentarians creating the kind of work that I would like to create made me feel as though I would never be able to penetrate the exclusive men’s only club of adventurers, writers and correspondents. It is undeniable that gender diversity is lacking in many facets of the literary and artistic community. Perhaps if there had been greater opportunities and pathways for young female writers, artists, and journalists decades ago, my fictitious dinner party would have more place settings for females guests amidst the current sausage fest.

Ideally, one’s gender should not be a topic of discussion, but rather the individuals’ skill set and achievements should set tongues wagging in heated, passionate discussion. In my everyday life, I attempt not to factor a human’s gender into the equation at any point in time during our interaction, unless we both have to pay a visit to the bathroom, in which case society scythes us off into distinct gender groups.

I dearly hope that other people in the world view me as a writer, an artist and a journalist, albeit an amateur one, and not as a female who happens to be a writer, artist and journalist. I would not want someone to hire me purely because I am female. I would like someone to hire me because of my talents and skill set. Equally as much, I would not like someone to dismiss me because I am female, but dismiss me because of my weaknesses. And being female is not one of those.

A human being consists of more than the sum of their parts, and are much greater than the flesh and nerve casing which harbours the spirit and the soul. Palin, Theroux, May, Gelhorn, and Fry are all, in my eyes, creative and clever people who have amassed a great body of work that will outlive their mortal presence on this planet. That is what I admire about them all. That is what I strive to replicate in my own time on this Earth.

It would also be nice to have an actual dinner party with these people one day, and not merely discuss them weirdly as though I were intimate with each one of them. Perhaps one day I can elevate myself from stalker to collaborator, but that is a discussion for another day.