11 things I learnt from annabel crabb 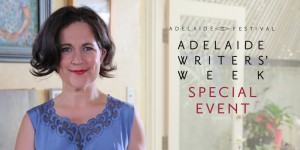 Political journo and TV presenter Annabel Crabb’s has investigated women, men and domestic expectations in her new book, The Wife Drought. In an Adelaide event earlier this week, Crabb discussed the themes in her book in her characteristically witty manner. Here’s what I learnt.

Crabb’s thesis is that women need wives in order to participate in employment the same way men do.

‘I think there would be more women in federal politics if they had the same spouse as men do,’ she said. ‘My definition of a traditional wife figure is: they either don’t work, or work part-time.’

A traditional wife, according to Crabb, serves as support, a helper who keeps the domestic front looked after, and who allows you to be a parent without being a primary carer.

A lot of our assumptions are revealed in our language: a mum is seen as a full-time occupation, whereas fatherhood is something a man does before and after his work day.

‘Men spend their whole lives conditioned to think that the best way to be a father is to be a full-time earning worker,’ says Crabb.

Flexible employment is designed for women, not men

There is a silent expectation that flexible workplace policies are designed just for ‘working mums’. For example, maternity leave can last six to twelve months, whilst paternity leave is generally two weeks. Crabb called it ‘weird’ that we don’t expect men to take time off work for their family, in the same way that we do women.

‘We spend a lot of time worrying about the barriers for women at work – we make up about 45% of middle managers, 10% of upper-level, and about 2% of CEOs – but we don’t look enough at the barriers for men leaving the workforce.

Crabb would like to see an increase in the conversation about male parenting. ‘Men need to whine more about this stuff. I’d like to see more men whinging about their busy days of getting to childcare on time and making monster costumes and all that ridiculous stuff.’

Research institute NATSEM discovered that within the average 40 year career, beginning at 26-years-old, a man will earn $2 million, or $2.5 million if he has kids. And over that time, a woman will earn $1.9 million, which retreats to $1.3 million if she pops out some babies.

‘This is due to what we call the marriage premium,’ said Crabb, ‘In which men are thought to be better employees when married with kids. They are understood to be more reliable and competent.

‘But conversely women are seen to be less reliable or stable or committed. We have assumptions that work at a deep level for what getting married means for men and women.’

‘I was astonished – I thought it was somehow even everywhere. Because overall, men average 18% more than women. But at the lower paid end of the workforce, the pay gap is only about 8%. And in the higher echelons, you know, doctors and lawyers, it’s about 30%.’

To change traditional roles, we need both sexes

Crabb believes that we must listen to both genders if we are to progress to more equal roles.

‘I don’t think we can look at women’s experience without men. If we worry about women juggling work and family, we leave out half the population in discussing that struggle.’

‘Having it all’ is bullshit

‘I hate the term ‘having it all’ because it sounds so greedy and unreasonable. It’s fine to liberate women to do everything – they end up doing everything and then having a nervous breakdown.’

‘No one has a clue at the start! Men’s paternity leave averages two weeks. Dad goes back to work and mum is busy getting really good at putting tiny arms through little cardigans, and doing it fast. Those early months are really crucial at getting good at that stuff.

The trope of the hapless husband is damaging

The acceptance of disparaging men’s competence on the home front continues to shock Crabb.

‘At the schoolgate you’ll have Mums saying: “Oh, my husband can’t even see dirt!” As long as you implicitly expect men not to be good at stuff, how will things ever change?’

(At this point the author had the audience in hysterics, with anecdotes about her ABC program Kitchen Cabinet. In the show she visits the homes of politicians, and they cook her a meal. Joe Hockey and Tony Abbott were quite obviously out of place in their own kitchens)

There are more ‘house husbands’ in the US than in Australia

Following the economic collapse, widespread unemployment was much more common in America. This caused a demographic shift, in which there were huge numbers of women being the sole breadwinners of a household.

Crabb has a message to young women

‘Choose your partner wisely, and have the conversation [about domestic work and children] early. You cannot work without a proper housework arrangement.’

You can buy The Wife Drought here.