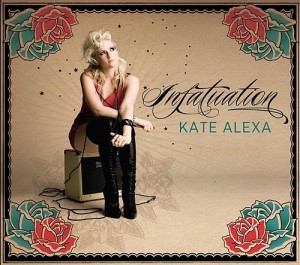 Previously the wonder-woman of teen series H20: Just Add Water with her track Ordinary Girl, Kate Alexa is straying away from her good-girl-next-door reputation and diving straight into the deep end of everything drugs, sex, alcohol and love in her latest album Infatuation.

Alexa’s career launched at the early age of thirteen, meaning the experience of teen living and social anxieties had yet to be displayed in her lyrical creations, but this album has got the conscience covered when it comes to all things growing up. Infatuation comes as Alexa’s second studio album, and she has cherished her confession on her website that the collection of tracks reflects her ‘new soul’.  Unfortunately for Alexa, however, two singles and videos from the album were released prior to the launch in 2011, and were unsuccessful in placing on the Australian charts.

Whilst Alexa has previously admitted to having Alanis Morissette, Oasis and Skyhooks as iconic inspirations in her past works, the only remaining and identifiable valued artist of her tastes is Madonna, with many of Alexa’s Infatuation tracks adopting the light and upbeat melodies that the living-legend is known for.

So into the nitty-gritty…Infatuation is definitely not an album for Kate Alexa’s previous audience—the innocent H20 crowd, who, let’s face it, have probably grown up and into the dirty-beats of today anyway. The album features many tracks that dismantle and analyse the purpose of living through love’s cliché games, the troubles of growing into a woman, and the endless journey of finding oneself. Though she has kept the bouncy riffs, Alexa has seemingly become up-close and personal with the mighty F word—a major motif in this 2011 release.

I have to admit that I was mildly shocked when I listened through the tracks on this album, especially with Addict being the leading title and being probably the most abrasive. This song is a fix for the paranoid, and its lead statement is, ‘Without you, I’d be fucked’.  Evidently, Alexa is exploring the imbalanced lifestyle of a broken human being, in this lyrical adventure, but whilst the tune is light-hearted and playful, the lyrics are sharp and straight to the point: ‘It feels like an overdose, but there’s no pill for this pain’.

My issue with the album was its common issue of most tracks seeming a little too much like the one before them. They all adopt a brassy hint of melodies and scales, which slide rapidly up and down to make most of the songs fast-paced and exciting, but during my listening of Infatuation, the album’s title track, I found myself asking whether the song had even changed from the previous one. What I did like, however, was its similarity to the Peter Gunn riff from Blues Brothers. ‘Gotta love a bit of Peter Gunn.

But with track three, Alexa is back into her old world with Katie, a tune about what it is like for a woman to live in a seemingly perfect world, one where ‘everything looks like the cover of vogue’. Listening to this one, you’d almost expect to be watching a Barbie commercial, or a Disney Princess movie; it’s very old-school Alexa, which is why she may have called it Katie.

Infatuation is an easy listen for those who like lyrics that are straight to the point and don’t fluff things up and sugar-coat them. Life is hard, edgy and damn annoying, and Alexa is definitely conveying that in her 12-track collection. I struggle to believe that Alexa has completely grasped the grounds of her ‘new soul’, with a few flashbacks into her past sounds in some tracks on the album, but it is evident that she is attempting to capture a new audience with this release. No more mermaids for Alexa; she’s all grown up now.