american pie and the objectification of women 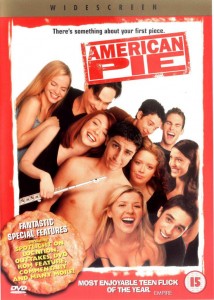 I’m watching a movie with friends. We’re swaddled in doonas and darkness; popcorn hot in our hands and its scent rich in our noses. The classic Universal Pictures song blasts the room and light bursts from the screen. American Pie opens with the image of a teenage boy masturbating to the sexual moans of a woman he hears through his T.V. In a room full of men, I start to feel a little uncomfortable. But that’s nothing on what I’m feeling several scenes in, having endured a fanfare of women pressed into too-tight bikinis being ogled and degraded by the male protagonists; I’m starting to get upset.

In this room, my voicing discomfort will likely see me typecast me as a too serious buzz kill, a radical feminist who’s ruining the good time. But there is valid reason to be upset by what’s happening on-screen, and what’s more, to be highly disturbed that most people would dismiss this upset as sensationalist.

Psychological research suggests that exposure to movies which portray women as tools for sexual pleasure, possession and domination (such as in American Pie) may contribute to sexual objectification, harassment and violence in real life. This occurs in two ways. Firstly, exposure to such portrayals can influence how men perceive women and sex. And secondly, it contributes to the conditioning of all viewers to expect and condone sexual harassment and violence at large.

Vaes et al. (2011) found that sexualisation prompts people to focus on a subject’s appearance rather than their personality. Studies by Hefflick & Goldenburg (2009) show that when encouraged to focus on a woman’s appearance like this, people disassociate them from ‘human qualities’, such as ‘warmth, morality and competence’. As such qualities are considered necessary for personhood (Loughnan & Haslam, 2007), this disassociation indicates that objectification is taking place, whereby human subjects are perceived by others as objects to be looked at and used (Hefflick & Goldenburg, 2009). Cikara et al. (2011) relate this to sexually objectifying imagery, and found that viewing it encourages men with sexist attitudes to objectify women. This is particularly troubling considering a study conducted by Rudman & Mescher (2012), which showed a strong relationship between sexual objectification of women and propensity to sexual aggression and rape.

Studying responses to more explicit sexual media, including X and R rated films, yields even more disturbing results.  Depictions of sexual violence, or scenes wherein women are sexually dominated, degraded or treated like objects have been shown to increase male viewers’ acceptance of sexual and interpersonal violence and rape myths (Bauserman, 2010). Similarly, a number of correlational studies have pointed to a seeming relationship between exposure to such media and sexual violence (Bauserman, 2010).

We cannot conclude from these studies that sexual violence and harassment are caused by exposure to representations of sex and sexuality in mass media. These problems are highly complex, and born from a large number of factors. And further, it is alarmist to say that watching one scene of a movie will permanently affect your perception of women.

However, it is also naïve to dismiss the influence of film altogether. Such portrayals do affect our beliefs regarding the acceptability of sexual harassment and violence. Mass media such as movies help construct the environment in which we are raised and live. Not only do we adopt the messages sent by media through exposure, but we actively turn to it as a resource to learn sexual norms, with many Australian youths turning to mass media rather than schooling or family for information about sex (Flood 2007).

This influence is worrisome considering that content analyses of mass media reveal recurring themes of objectification, domination and possession of, and violence towards, women in sexual representations (Bufkin & Eschholz, 2012). The increasing visibility of these representations (Bufkin & Eschholz, 2012) works to normalise sexual harassment and violence, so that we laugh at a young girl being raped by a ghost in Scary Movie II, or roll our eyes at people who say something sexist during American Pie. The more normal it seems, the more we expect and condone sexual harassment and violence, and we live the consequence of this every day.

American Pie is just a movie, I know. But we shouldn’t underestimate the impact of one stitch in the fabric of a culture in which sexual objectification, harassment and violence are both common and condoned. There are probably much healthier ways to learn about and express sexuality than by watching Finch trying to woo Stifler’s mum.

4 thoughts on “american pie and the objectification of women”