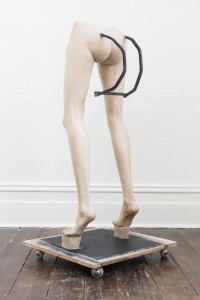 Last Thursday I visited the highly anticipated Melbourne Now exhibition, which, as the Director of the NGV’s Tony Ellwood elicits in the forward to the catalogue, sets “out to explore how Melbourne’s visual artists and creative practitioner’s contribute to the dynamic cultural diversity of this city.”

Spanning expansive territory across the Ian Potter Centre and the NGV International, the most bandied about word I heard in the opening speeches today was ‘ambitious.’ This was followed hotly by ‘Mercedes,’ but more on that later.

In the least, the premise of the exhibition certainly is ambitious. Attempting to provide an overview of contemporary art, architecture and design practice that represents an entire city characterised by diversity poses many tricky questions (not to mention slippery definitions of what actually constitutes ‘nowness,’ and how that might be measured). With the listed names of curatorial team running the length of your arm and then some, I was concerned that the old adage around ‘too many cooks’ might just prove true in this case.

Thankfully, Melbourne Now did not justify these concerns, in fact, quite the opposite- the structure and presentation of the show felt very controlled and tightly bound. Very curated. There were certainly no surprises lurking in the halls, and in its way, that is representative of the Melbourne art scene- a safe aesthetic collared around beautiful design and execution is something which often dominates here. The installations by fashion, object and furniture designers flowed seamlessly into the work of the visual artists’ and I would have been unable to make a distinction without the wall plaques. Does this point to an increasing difficulty around demarcating practise or an increased fluidity of ideas that makes everything more exciting? Well, that’s another article, but it is something worth pondering. At times the designers were clearly bundled together away from the works of the visual artists, such as the second floor of the Ian Potter Centre. This worked very well aesthetically- the pieces gained strength from one another and were visually arresting. However, why had others been given what now seemed to be the privileged position of mingling with the ‘artworks’? Why were the fashion designers providing installations instead of pieces? No clear reasoning behind this presented itself to me.

The problem I have with the show being sold as an overview of specific time and place- Melbourne, now– is that it means the collected works as a whole become incredibly reflexive. It felt as though the curators had chosen work that they felt characterised a certain Melbourne ‘vibe’, rather than casting their net dangerously wide and deep to give true representation to the different perspectives operating within. As an obvious example, I was rather baffled at the extensive inclusion of the work of A Constructed World. Although they are two artists who I greatly respect and admire, they currently live and work in Paris. Does this then mean that an artist doesn’t need to live in Melbourne in order for their work to represent it as a form of cultural identity in the present? If so, how is the work by A Constructed World representing Melbourne exactly, if geographically we cannot place them here? Is it an aesthetic? Or perhaps an ambition? Can anyone anywhere in the world then represent the ideals of ‘Melbourne now’?

As I wandered through, I could not stop thinking of countless other artists whose work could easily have slotted into the show. When your curatorial premise is as loose as ‘we all live here’ (even though some of them don’t) it’s not hard to fill the brief. Some of the choices felt arbitrary, or tokenistic because of this, and left me wondering what exactly it was that set the chosen artists apart from the many others working in Melbourne. One clue we have is the exhibition guide. It clumsily, page after page, lists where the artists have studied, or other major galleries they have shown in, devoting precious little space to themes or concepts of the work. It feels like a parade of achievements intended to advertise, flanked by the ‘Melbourne Now’ yellow, as coined by the Mercedes Benz spokesman. Branding initiative complete.

Yet we do have a wealth of creative talent here as the show, despite its curatorial issues, firmly and wonderfully attests to. In particular I was struck by one of the rooms of the NGV International. The viewer is first met with a wall of Anastasia Klose, before moving through to a space filled with the sculptural work of Claire Lambe followed by a performance installation by Bridie Lunney; a video installation by Perks and Mini and a small back wall piece by A Constructed World. This was close to a mini-exhibit of its own. Rounding the wall and running smack bang into Lambe’s pair of fake tits perched on top of an ugly mound of unfired clay wedging upright a precarious pane of sheet glass, I had my first and only, little heart racing moment of the day. Lambe’s sculptural work is challenging and unpolished in a purposeful way and situated next to the thoughtful endurance performance of Lunney- strings drawn between the body, frailty, and simple possibility were exhilarating. The room had a feeling of life in a way that many of the other rooms failed to ignite. There is movement- perhaps revolving around the potential for failure held here- or in the least, the embracing of a practice which incorporates failure as a trope, very much a facet of the practices of Klose and A Constructed World too.

It is a sense of completeness which put a stranglehold on many of the other rooms. There’s a polish, a sheen, a ‘finishedness’ which holds you back a little. However this characterises the feeling I get when viewing most visual art exhibitions I see in Melbourne, in this sense perhaps it is apt. There is a feeling of sterility that can be at times claustrophobic in the art world, and though curator Max Delaney references ‘conceptual and performance art of the 1960’s,’ as the grounds for where the focus of the art world has shifted, the spontaneity, intensity and frustration surrounding the limits of the individual and society which characterised the 60’s was not a feeling that pervaded in these rooms. If the artists are indeed investigating ‘new social realities’ as Delaney suggests, it feels more through a craving for individualist identity rather than as a driving desire for radical social change.

The majority of the exhibiting artists and designers have already achieved a high level of critical and commercial success. There were a number of up and comers thrown in for good measure, but on the whole the show revolves around well-established names.

I was surprised to see a huge portion of space taken up by a Daniel Von Sturmer installation at the Ian Potter Centre. Having represented Australia in our pavilion at the Venice Biennale in 2007, I found it somewhat amusing to think that his work can now be said to represent not only our Nation as a whole, but somehow encapsulate the specificity of Melbourne simultaneously.

I could not stop thinking, ‘what characterises ‘nowness’’? Whilst some of the work was commissioned, some of it was created years ago. What exactly is the ‘now’ the show is hoping to tap in to? I have no answers.

Perhaps I am not seeing the broader picture. As someone who has been slogging it out in the Melbourne art scene for ten years now, all of these names were familiar to me, as was much of the work. Going in expecting to see things completely fresh was perhaps naïve on my part- should I have expected to be shown something new about the world I already inhabit? Probably not. To the general public however, this will all be incredibly exciting I’m sure. They’re certainly not hitting up the city’s artist run spaces on a frequent basis, so I do appreciate what this show might do for artists’ exposure. As government funding is increasingly drying up and becoming harder and harder to expect as a supplement to your practice, there is a massive need to attract philanthropic interest to the scene. There was an incredibly awkward silence when the Mercedes Benz representative, I can’t remember his name, chirpily urged the room, made up mostly of the featured artists, to ‘go out and pick one up for themselves’ I burst into laughter and had to bury my face in my hands. He continued on as though nothing whatsoever was amiss. It is this laughably quaint misunderstanding towards the genuine economic position of most Australian artists which I hope this exhibition helps to shift.

The public needs to know what artists are doing in the city- there is very little recognition of the reality of the lives of working artists, which can be characterised by marginalisation and extreme poverty- the idea of the majority of them being able to afford a new Mercedes is, quite frankly, hilarious. So here’s hoping they advertise the hell out of it, as they are rather wont to do, and we get a lot of foot traffic through the doors.

Really though, the most baffling aspect of the entire show for me is why it has taken so long to happen. Why haven’t our two major galleries previously committed to promoting and sharing what is happening in our own backyard? Why are we constantly shown blockbuster retrospectives of artists long since dead that costs millions to get here and therefore are a restrictive $20 or so to attend? Why do we expect our artists to thrive even as the ability to make or be given money to continue working is continually pulled further and further away from them?

There is so much more to say about this show, and I’m sure many words will be spilt on the topic. I urge everyone to go down and see it for themselves. Not only because some of the work is inspirational and wonderful, but because you should give a damn about supporting the artists who work hard, non-stop, to entertain you. What policy makers and funding bodies sit up and take notice of is visitor numbers. The more you get in to galleries, the more chance artists have of being able to work, live and prosper in this city.