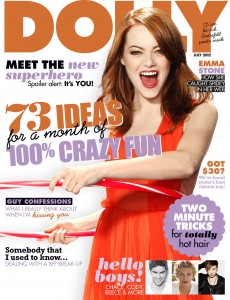 As she lay in bed at night reading the latest Girlfriend or Dolly magazine, pre-pubescent Jess Planner always dreamt of her first date.

It would be perfect.

He would pick her up and they would go to a movie. He would buy her dinner and soon enough, he would introduce her to his parents before they began an earthshaking romance.

But, Jess, now 16 years-of-age is troubled by a question that remains unanswered by her collection of magazines.

‘Why aren’t any boys like the ones in the magazine?’

According to research by Mission Australia last year, over 55% of the country’s young people aged 15-19 turn to magazines for advice or support. Yet Jess said that

Dolly and Girlfriend are less interested in providing them with real and helpful advice than with glamourising the idea of adolescence, which leads to her feeling disappointed or confused about the situations she faces.

‘We just assume that the way boys are talked about in magazines is the way they are… but they aren’t like that at all. I think they want [dating] to look like a movie,’ she said.

Hers is just one question that makes up the struggle of identity that comes with growing up. And with a number of other important questions going unanswered by the leading teen publications, more adolescents are developing unhealthy ideas and impressions that are impacting on their physical and mental health.

This is where the red flags appear. When their questions go unanswered, curious, impressionable teens often look to the media and celebrities for cues which can lead to the development of unrealistic, unhealthy and often over-sexualised ideas that shape their view about the world, and how to behave in it.

Founder of an online teen health magazine, the Teenage Girl’s Survival Guide (TGSG), Gaynor Alder said these impressions are dangerous for a young girl’s self-esteem and developed her publication to set teens back on the right foot.

‘I looked at current teen publications and saw that they were sending such bad messages to teen girls.

‘Teenager’s lives are full of dramas and they are always looking for advice.

‘The [TGSG] helps teens cement a healthy self-esteem early on so when they go into early adulthood, they don’t spend so much time trying to find themselves and make better choices,’ she said.

But it’s not just information about relationships that is setting young girls astray. Jess said mainstream magazines don’t do enough to teach girls about body issues such as anorexia nervosa.

‘Some girls at my school want to develop anorexia so they can get skinny then go back to normal. I think they need to realise it is an actual disorder,’ she said.

According to Eating Disorders Victoria, eating disorders are the third most chronic illness in young women and the prevalence in this age group is increasing.

Yet, teen writers have admitted that their messages don’t always cut it. Girlfriend’s advice columnist, Dr Michael Carr-Gregg wrote in the Australian Psychological Society’s (APS) April bulletin that it’s hard to give targeted health advice to young girls when the magazine receives thousands of queries each week.

‘Sometimes there aren’t enough specific details to offer detailed guidance, so one has to reluctantly settle for offering generic advice,’ he wrote.

Gaynor said teenagers are starting to feel that mainstream magazine’s mental health reports are inadequate and are actively looking for answers online, with the TGSG’s mental health and self-esteem articles getting the most views and reader interaction.

One teen wrote on a self-confidence article, ‘Wow!! I love this site… it’s like spending time with someone who understands you!!’

Amidst the struggle that is adolescence, teens like Jess feel their cries go unheard by leading teen magazines which appear to be less interested in providing real and relatable advice than they do with glitz and glamour. With a staggering 14 percent of the country’s teens suffering with a mental illness, editors owe their readers more support during these challenging years to help them become healthy, self-assured young adults.