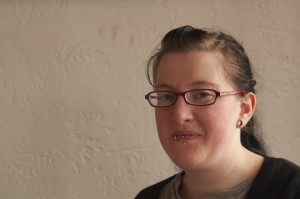 How would you describe yourself and your life?
I’m an honest person, and I am by turns shy and outgoing, both in extremes. My life is, above everything else, creative and moving. I always prioritise making and consuming creative things (usually wordy creative things), and fitting in all the amazing stuff that’s available to me is sometimes a challenge, so I’m often flat out.

I’m a blogger, I write fiction, poetry, reviews and creative non-fiction and I sell books. I’m currently studying and writing a memoir. When I do get a chance to breathe, I go way overboard and watch whole TV series in one or two sittings – most recently, season four of Nurse Jackie.

What does Feminism mean to you?
It means being assertive and questioning. I’ve read and engaged with some feminist work that I really loved (Adrienne Rich; “Pretty”; A Room of One’s Own), and while it’s great and definitely empowering to know what other women have to say, I practice a kind of feminism that is more about being confident that you’re rad and not letting anyone tell you that being a woman impedes your ability to be just as rad as you are.

Feminism, for me, is about standing up for women being excellent – just as excellent, totally differently excellent as/to men. Now to refer to the people I said aren’t entirely important to being a Feminist: Luce Irigaray talks about the way that women are defined as an inversion of men, that a vagina is an innie penis, that our capabilities and anatomy are seen as variations of men. What Irigaray argued for was a definition of “woman” that stands totally separate to men, a definition that doesn’t rely on any male kind of reference-point. This idea is linked to what I think Feminism is – it’s about being self-sufficient in all the glory that is being female, in all the wholeness that female-ness is. It’s about saying “Yay, Ladies!” in our own lady terms.

Which feminist stereotype annoys you the most? Why?
I hate the stereotype that says that feminists are arrogant or annoyingly vocal. When I told my boyfriend about this column, he said, “Since when were you a Feminist?”. I looked at him in disbelief and replied, “I’m a woman. Why wouldn’t I be a Feminist?”

I get annoyed by the thought that to be a Feminist, it needs to be proclaimed and then aggressively chased. I don’t feel the need to hate on guys just for being guys, and I don’t feel like I’m being persecuted for being a girl at every given chance. But I do feel comfortable voicing when I feel like something’s not okay. I’m confident, not annoyingly vocal, and the most effective Feminists are like this.

If you could pass on one piece of advice to other feminists, what would it be?
Don’t let anyone make you feel guilty for standing up for what you believe in. There’s a weird culture of Feminist-phobes out there, and no shortage of people (even other women. WHAT?!) willing to roll their eyes and put your complaint down to “being a ranty Feminist”. Don’t let them. People feeling guilty for wanting better for women is what’s supported patriarchy for…ever.

Oh, second piece of advice (again!) – get ye to Cherchez La Femme! The first Tuesday of every month, Karen Pickering hosts a panel of really cluey women, and they talk about a topic (last month was ‘food’) and how Feminism intersects with that topic. There’s no soap-box here, it’s really unpretentious and realistic. Just really smart women talking about how things are, and instead of just whining and feeling persecuted, it’s constructive, positive discussion. It’s a great way of keeping in touch with Feminist issues without getting academic or angry.

Do you have any feminist heroes? Who are they and why?
Brienne of Tarth, from Game of Thrones. Brienne’s a really strong woman. She fights men, and is respected by men as their equal. Of course, she is often mocked for not being feminine enough, but Brienne takes it in her stride and rocks on anyway. She follows a king because she respects him, and when he dies (sorry – spoiler?) she pledges allegiance to Catelyn Stark. While Brienne’s decision is to go out and be physically aggressive, it’s not to prove anything to the men, it’s because it’s her choice. Brienne equally respects Lady Stark’s devotion to her children, and encourages her to be strong in her own way.

So I love Brienne because she’s a tough lady.

Sam van Zweden muses about books, writing and life on her popular blog Little Girl With a Big Pen.

One thought on “feminist of the week: sam van zweden”