feminist of the week: stephen benko-nehme 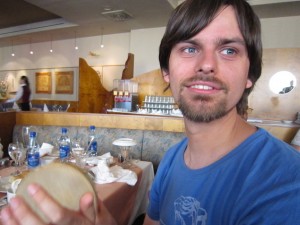 How would you describe yourself and your life?
I’m a Western Caucasian male nearing middle age, living in middle-class suburbia. Why are these specific details important? Because my relatively easy existence alluded to by my demographic puts me in a unique position – I can do something positive for social justice causes. Not only that, I believe I have a responsibility to do so. With that in mind, I have made lifestyle choices aimed at “doing what I can”. It’s never enough, but I feel good about what I am doing. To quote punk band Minor Threat –

“You tell me that I make no difference
Well at least I’m fucking trying
What the fuck have you done?”

So, I have a social conscience. This is one way in which I define myself. To me one of the most important ways.

What does Feminism mean to you?
To me Feminism is synonymous with struggle. While the movement has made some progress, without question the world in which we live today is still light-years away from gender equality. The struggle continues. Like so many social justice movements, the battle is an ongoing one in a world which more often than not turns a blind eye to inequality, of all kinds. It is always easier to engage the collective blinkers and ignore the struggles faced by the species. The tragic part about the Feminist struggle is that it really is not one faced by a minority – for all intents and purposes females make up half the human race. That makes the very fact that the movement is needed a sad indictment on our race.

Do you think feminism has a place in today’s society?
I think feminism is as vital a movement today as it has ever been. The victories won by the movement in the past are not an end to the struggle, but are clearly stepping stones. It’s quite simple – watch Channel V for half an hour during the day, imagine an impressionable 8 year old girl attentively absorbing everything she is seeing and tell me if Feminism has a place in today’s society. This is but one, Western-centric example. It’s a simple one, but an important one because popular culture is the only culture for many young girls and boys alike. This is a culture which helps to define the moral compass of developing minds. The 8 year old of today will be the adult of tomorrow, so Feminism is as relevant a movement in today’s society as it was in yesterday’s.

Which feminist stereotype annoys you the most? Why?
Feminist = man-hating lesbian. A social conscience is not limited to a sexual orientation. And just because someone is pro-woman does not make the same person anti-man.

If you could pass on one piece of advice to other feminists, what would it be?
To speak up when you see or hear something contrary to your ideals. The truth is I need to heed my own advice. I have not studied Feminist theory and am not an active fighter for gender equality, yet the things in which I believe are closely aligned with Feminist ideals, so why don’t I speak up more often?

Do you believe all women should be feminists?
No. I believe all human beings should be Feminists. Is there a female in your life for whom you care – mother, sister, friend, girlfriend or wife? If the answer is “yes”, there really is no excuse not to be a Feminist.