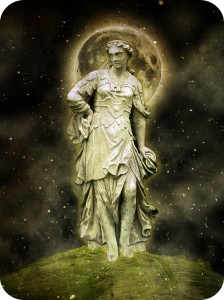 Over the last century, women’s rights movements in Western culture have led to a challenge of the patriarchy and in particular the religious patriarchal structures that have governed laws and cultural expectations for thousands of years. Mainstream Western religions – particularly Christianity and Judaism – have been criticised by feminists for both excluding women and positioning them as inferior to men. The opposing culture which I would argue has now become mainstream is atheist feminism, a movement against all religion, declaring any metaphysical construct as a method of oppressing women. This is a movement voiced in Australia by independent media and pop culture, with media personalities such as Catherine Deveny appearing at Global Atheist Conventions and regularly publishing her views on Twitter: ‘People are moral DESPITE religion’.

Amid this anti-religious uproar that has developed in feminism, another more secular culture has developed – one that has embraced religion and spirituality in a non-patriarchal way. I will call this culture ‘feminist witchcraft’ though it is also called Wicca or the Craft among other names. Feminist views have merged with pagan beliefs, creating a new (or renewed, depending on who you ask) spiritual system invoking the Goddess and encouraging individual thought and expression. It is a New Age spirituality, the kind that encourages exploration, eclecticism, and an understanding of the self as divine. This culture widely encourages pluralism and individual thought, thus the aspects I have explored below only cover a small portion of feminist witchcraft. As noted by Paul Reid-Bowen in his defence of the supposed incoherencies of feminist witchcraft, ‘philosophical analysis, systematisation and theorising are frequently identified by [followers of feminist witchcraft] as paradigmatic masculinist/patriarchal preoccupations’, and so I have attempted to avoid these modes of research.

Earning a mention in TIME magazine in 1991, feminist witchcraft ‘involv[ing] as many as 100,000 US women’ was defined scathingly as a ‘mixed brew…of evocations of female power’ that has ‘invented’ new rituals. Closer to home, Barry Spurr from Sydney University declared in 1995 that feminist religious movements ‘lead to the exclusion of men (and women who do not toe the feminist line)’, confused as to why feminists were leaving the Catholic faith rather than simply ‘magnify(ing)’ Mary, ‘the most prominent female in the New Testament’. In this way, the movement to embrace the Goddess has been condemned as ‘drivel’ by scholars of traditional Western religion and trivialised by mass media. Feminist witchcraft remains an alternative culture; a culture rejected by current mainstream cultural standards, while its associated practices – a few of which I have outlined below – are manifested in Western society today.

Thanks to multiculturalism and new religious freedom, individuals have become able to explore multiple spiritual paths without fearing God will strike them down. Tom Roberts, editor of the National Catholic Reporter in 1993, declared that while he himself didn’t follow feminist witchcraft, ‘the very utterance “goddess” in a patriarchal monotheistic culture says diversity, pluralism, planet’. Roberts was enchanted by its lack of repetition compared to patriarchal theological literature.

Despite Roberts’ open mind, pluralism remains a liberating idea in mainstream culture but has not yet been fully accepted. For example, in Australia, same-sex relationships are no longer taboo, but same-sex marriage is still illegal.  Non-dogmatic beliefs can play in the street, but patriarchal religions still ultimately control the law. I’m not sure I’ve given the most appropriate example, but what I’m trying to show here is that these newly accepted pluralistic, liberating movements are still processed by a societal structure that isn’t pluralistic. The implication here for feminism and feminist witchcraft is that if we don’t talk about these concepts in a patriarchal language, it often goes unheard.

An eclectic and spiritual practice, Paganism is a spiritual orientation that focuses on nature, pre-Christian deities and individual thought. There is no sacred text to follow, and thus there is no list of thou-shalt-nots. One principle of Paganism today – Neopaganism – is active participation of female and male, rather than the suppression of either gender. In this way, Neopaganism shares common ground with feminist movements for women to be included and worthy in society.

Another difference between Neopaganism and mainstream religions is that the deities – usually the God and the Goddess – aren’t supernatural beings, but natural beings that are found in nature and in us. Feminist witchcraft has embraced the idea of the Goddess being found within each woman (and often within each man), leading to individual and political empowerment.

Due to its Pagan origins, feminist witchcraft often celebrates a Goddess that is part of the world as well as within the self. As a result, there is a responsibility to nurture nature through practices such as tree planting rituals and conservation of resources. Feminist witchcraft often encompasses eco-feminism, which recognises the natural connection between woman, nature and the divine. This contrasts the patriarchal and monotheistic view that nature is separate and not sacred and has encouraged a return to nature, in the midst of consumerism. I am reminded of a recent trip to the store Perfect Potion, where the vendor sprayed me with their newest fragrance, Green Goddess, which the brand claims ‘helps you to appreciate the essence of nature, it nurtures and comforts, it promotes self-awareness and wellbeing and helps one to embrace new ideas’.

A pluralistic movement, ever changing and becoming and oppositional to mainstream culture, feminist witchcraft encompasses the self, the woman and the world. Currently it remains an alternative culture, eclectic and challenging to both conventional religion and today’s feminism. But the lines are beginning to blur. Zsuzsanna Budapest, founder of the first feminist, women-only, witches’ coven declares that ‘there remains a large schism between so-called political feminists and spiritual feminists, but it is an imaginary difference.’

For more information about feminist witchcraft and associated movements: