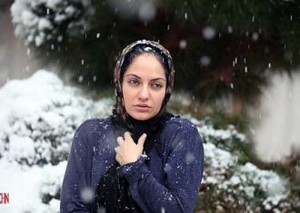 “Black-and-white movies suck,” a friend once complained to me. For her, foregoing colour in movies is the cinematic equivalent of using two sticks when you have a lighter. (“Why do we have to reject technology to be all arthouse, right?”)

I disagree. The Snow on the Pines (“Barf Roye Kajha”) – an independent film by Iranian director Payman Maadi– is shot in black-and-white, and the bare-bones cinematography suits the sparse set and subject matter.

The Snow on the Pines opened the 3rd Iranian Film Festival Australia in Canberra last Friday.

The film centres on Mahnaz, a piano teacher, who inadvertently discovers her husband’s been hiding an affair after he goes on an extended business trip. She hides her troubled relationship from her mother and neighbours, instead seeking solace from her best friend, who’s recently divorced.

At first glance a drama with a classic love-triangle trope, The Snow on the Pines also touches on the role of women in modern Iranian society.

The film’s female leads are all stuck in some way: in unhappy marriages, uncertain divorces or static trysts. Mahnaz’s neighbours are concerned when she’s home alone (by implication: without a husband, or another man). She’s physically stuck when she needs to – and can’t – drive somewhere. Her friend even suggests it was her lack of desire to have a child that forced her husband away.

The film certainly doesn’t shy away from heavy issues, but it’s punctuated with lighter, comedic moments (in “the Iranian happy/sad style”, as an Irish friend jokingly refers to it).

In one scene, Mahnaz attends a neighborhood meeting to discuss recent burglaries in the area. It’s not unlike an apartment body corporate meeting in Frasier: an overzealous, bald neighbour in a neckbrace, proselytizing about security guards; a couple clucking in agreement; a man unable to stifle his giggles at a funny text message on his mobile phone.

Without stating what seems like the Absolute Obvious, it’s a small reminder to Western audiences that day-to-day life in Iran isn’t all that different.

So, go on. Challenge your own perception of Iran. See what life is like through the – admittedly stylised – camera lense of an Iranian. And, don’t worry, it won’t entirely be in black-and-white.

The Iranian film festival–  screening in capital cities across Australia over the next week– will also feature Closed Curtain, directed by Jafar Panahi, who broke a 20-year government ban on film-making to produce the feature.

The Iranian Film Festival is now on in Adelaide, Perth, Canberra, Brisbane, Melbourne and Sydney. For further details on films and ticketing, take a look at their website.