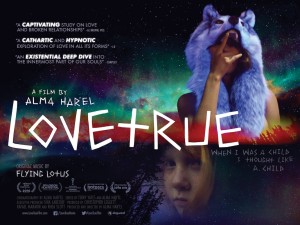 At the Australian box office in 2014, just 8 per cent of the top 250 films had female directors. There were 21 Australian films among the top earners, and women directed only 14 per cent of them.  These are just some of the many statistics in Screen Australia’s 2015 Gender Matters report that reveal the extent of gender inequality in the film industry.

Kicking off in Sydney this Wednesday, the For Film’s Sake Festival is all about tackling these disparities. Led by filmmaker and activist in the industry, Sophie Mathisen, the festival features a great range of female-led content, including documentaries, dramas, horror films, and a speech by Anna Serner, CEO of the Swedish Film Institute.

Lip’s Samantha Armatys got a sneak peek at documentary Love True, which has its Sydney premiere at the festival on Saturday 29 April. Read her review below, and find the full For Film’s Sake program here.

Love True is a genre bending collage by director Alma Har’el. Known for her first feature length documentary, Bombay Beach, and for the creation of hypnotising music videos for the likes of Beirut and Sigur Ros, Har’el stays true to her poetic imagery for this sophomore release.

The film opens with eerie handheld footage of a blonde man in his twenties running bare-chested along a potholed road, quickly cutting to images of him on a swing, smoking a cigarette, staring down into the camera. Already, the incredible score provided by electronic mastermind Flying Lotus entrances us and we hang happily suspended in the place between music video and film. Love True was funded in full by Shia LaBeouf, and it certainly shares some aesthetic qualities with Andrea Arnold’s American Honey, in which he recently played a central role. However, where Arnold uses subtlety and sparseness with her characterisation, through candid interview Har’el provides deep reflections on human nature and the interior worlds of her real-life subjects.

Before long, the scene cuts to an image of a young boy standing in the ocean wearing a t-shirt that says ‘Young Will,’ and in voice over, he provides the mantra of the film: ‘If I speak in the tongues of men and of angels, but have not love, I am nothing’. This line from Corinthians is butted up against the stark contrast of an ageing woman in a strip club wearing a t-shirt that says ‘Old Blake’. In this way, two of our central characters are introduced and we commence a journey to dissect the essence of true love as we traverse between these three stages of life – young, old and in-between – and what love means in each.

Despite the title of the film, it is not a romanticisation. Instead, the notion of true love is stripped back and exposed with all its blemishes. The film follows three real life characters in three corners of the USA, as they expound upon their own understandings and experiences of love. Alaskan exotic dancer Blake revels in the new love she has found with Joel, and begins to question the sustainability of her career and life choices. Coconut Willie reflects on whether he has misunderstood love, after finding out that his two-year-old son is not biologically his own. And evangelist singer Victory tries to understand the breakdown of her family by looking to her love of God for guidance.

‘Love is a very complex emotion.’

‘I think love, at least for my parents, was based around their faith.’

‘If you love someone, you’re going to love them forever.’

‘I don’t really know what love is, I guess.’

The film is decorated throughout with musings on love, but is never didactic. The viewer is immersed in the lives of the characters, and love is presented as a raw beating heart, pumping the blood through their veins in many ways. Love is fused with joy, anger, sadness, faith, pain, fear, elation, and is never confined to a single iteration. The bonds between romantic partners, parents and children, friends, women and even to oneself, are all explored and painted in broad strokes, creating an abstract definition that ultimately leaves it to the viewer to decide what is true when it comes to love.

Love True is a stunning visual journey that reminds us of the great and often overlooked talents of women in film. Be sure to get your tickets before they sell out, and get along to For Film’s Sake to rejoice in all the proliferations of female cinematic expression.