game of thrones: brace yourselves – nipples are coming 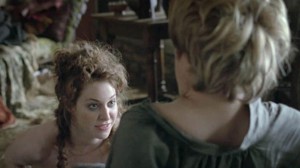 I remember when Game of Thrones first really started blowing up in its first season, a friend of mine told me she found it worrying. Actually the word she used was “weird”; she is a very diplomatic person. The fact that the most popular show on TV, a show everyone was talking about, prominently featured incest and huge amounts of sex and violence, bugged her. She thought it was a bad sign that these things were being absorbed en masse so readily. I said something about the fact that only the bad characters were incestuous demonstrated that the writers weren’t condoning it, merely using it as a storytelling tool, and that in context I didn’t think it was that worrying. But with season three kicking off, and Game of Thrones starting to dominate conversation and cultural discussion again, I feel my attitude changing.

The first episode of the new season had everything you expect from a classic Game of Thrones installment: the double-dealings, the rivetingly intense dialogue, the beautiful set and costume design- oh yeah, and tits. My housemate and I had settled back in to our tradition of watching the show together, I was enjoying getting back into the careful unfolding of the story, and then about twenty minutes in, a scene opened where Ser Bronn (Tyrion’s sellsword) is hanging out with a topless prostitute. I was totally dragged out of the story. I think I even said to my housemate “oh yeah, I forgot that this is a thing this show does.”

Because it has become one of the show’s defining features. The internet is awash with articles debating the rampant sexuality throughout the series – is it justified, does it need to be justified, etc. George R. R. Martin has discussed it eloquently several times, and to a large extent, I think the sex is justifiable. Game of Thrones is about power and morality, both of which are perfectly embodied by the politics of sex and gender—but I make a distinction between using sex as a narrative tool and using it as window dressing, and the fact that Game of Thrones does both makes this a tricky subject.

Another friend pulled me up today when I argued that the topless prostitute in the latest episode was unnecessary. “Why does everything in a show need to serve a purpose?” she asked. “Sometimes scenes are there just because they work, they don’t have to all serve the story.” This is a fair point, and nicely sums up the problem. Game of Thrones should have sex in it. It should have violence, and it should have incest, because as artists, the show’s creators have a right to choose what they use to tell their story. But artistic license only goes so far.

So I’ll ask the question again: how necessary was it to have a topless prostitute in the season three premiere? I think the episode wouldn’t have suffered at all had there been no naked women in it. My friend argued that it would’ve looked silly if the prostitute had been fully clothed—but why did we need the scene at all? All that happens is that Bronn is called away to tend to Tyrion. We could easily have started with Tyrion, have Bronn show up and say “damn, I was with this really hot prostitute, why you always gotta be ruining my fun?” But again I run into the wall of artistic license. The show made the decision for a reason, perhaps it’s more effective to show Bronn enjoying the prostitute’s company than simply having him say it. Then my friend said: “well maybe they just did it because that’s what people expect to see.”

And that’s where I have a problem. Game of Thrones is a ridiculously expensive show. HBO is in the business of making money. Yes, the show is renowned for its intricate storytelling, its production design and its fantastic cast. But, as my friend put it, the people buying the DVDs are straight white guys, aged 18-49. Simply put, the ugly truth is that Game of Thrones, paragon of television though it is, is not immune to cynical capitalist tendencies. Sex sells, and the show needs to be sold. I don’t think that the creators of the show are sexist, I think that they’re business-minded. A show that I, and many others, love and respect, uses naked women to encourage people to watch it… well I feel pretty disappointed. This kind of passive sexism (because I don’t think that the narrative’s attitudes are actively sexist, there are plenty of positive female presences in the show) is epidemic in pop-culture, and not even the most lofty of TV shows seems to be able to rise above it. Here we encounter another tricky area: should art be held morally accountable for its content? It’s hard to distinguish between the values that shows adopt in order to sell themselves, and the show’s own intrinsic values that it imparts to its viewers. But whichever kind Game of Throne’s sexism is, it’s definitely not making a stand either way.

The thing is, despite the success of raunch-culture embracing shows, there’s heaps of  TV out there that provide positive counterpoints to this; ABC Family’s Bunheads, for one, is a great example of hilarious female-centric writing that is neither exclusive nor patronising in its femininity; or Southland, an L.A.-set, Peabody award-winning procedural with bucketloads of strong women characters. I just wish that Game of Thrones, currently the biggest show on earth, could elevate itself above the use of naked women as eye-candy- because if our cultural flagships don’t buck the trend of sexism in pop culture, the cycle will continue unabated.

4 thoughts on “game of thrones: brace yourselves – nipples are coming”