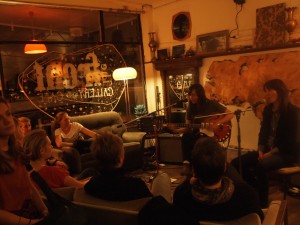 ‘We’ll have a little moment together and we’ll go home feeling good about shit,’ laughs Jen Cloher to a crowd of onlookers. She picks up a white electric guitar, and starts strumming. UNO players in the café corner set down their cards; the waitress bends to pick up a Melbourne Bitter from an empty table; outside, a man walks past, peeking through the window. Cloher begins with a story about Woolloomooloo: ‘I always thought it was pronounced Wooollooomooolooo.’

The Adelaide-raised singer-songwriter stopped in Canberra this month on an Australian tour with bandmate Courtney Barnett. Typically joined by bass, drums, and violin, the pair treated Canberra’s The Front Gallery and Café to a cosy double-act set.

Also on the all-girl set list: Julia Johnson, and Courtney Barnett (performing solo). Canberra locals might be familiar with Johnson’s raw vocals from Julia and the Deep Sea Sirens. The absence of cello didn’t dissuade Johnson in the least, who improvised one song by replacing a string solo with whistling. Courtney Barnett also impressed with her quirky, no-holds-barred lyrics: ‘I masturbated to the songs you wrote … it felt wrong/ but it didn’t take too long.’

Cloher displayed a similar honest charm through her tracks, canvassing everything from her mother’s diagnosis of Alzheimer’s, to heartache over a lover’s disinterest, to her parents’ recent deaths. Barnett joined Cloher on stage for much of the set, providing support guitar and vocals to tracks from Cloher’s upcoming album, In Blood Memory. ‘Numbers’ was a definite toe-tapping, cougar-affirming highlight (‘you might have some years/ on me but it don’t mean a thing’).

It should come as no surprise that Cloher is a NIDA graduate; she has an uncanny ability to tell a good story. In ‘Buckle Bunny’, she adopted the character of a U.S. rodeo groupie, Samantha, who follows rodeos from show to show (‘The bigger their belts/ the further I go’). In another track, she placed herself in the shoes of her mother, who continually asks her husband to re-tell the story of their first meeting.

There were tears from the couple sitting next to me. It’s not often that you see weeping at a gig (for me, the last time was at a very different venue: Lil Wayne at Bonnaroo, where a die-hard fan exploded in grateful, exuberant sobs during the first chords of ‘How to Love’). If Cloher noticed, she didn’t mention anything – or maybe’s she’s just used it. ‘God. My songs are always so bloody intense,’ she chuckled after playing Mother’s Desk.

It wasn’t all tears, though – the night ended in a sing-along, with Cloher keeping to her promise of ‘a little moment’.

Jen Cloher will be playing in Adelaide on November 9th, Melbourne on the 16th and 17h, and Brisbane on the 22nd, and Hobart on the 1st of December. For more details, see www.jencloher.com.