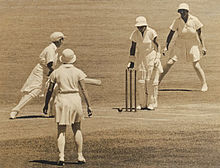 Seriously, women’s cricket is a thing. I didn’t know either – my only experience of girls playing cricket was in my own backyard in primary school way back when I hadn’t learnt yet that I was terrible at ball/bat/team sports. And even though every second channel on TV broadcasted international cricket this week, I bet you didn’t know either that the Australian Women’s Twenty20 Team (the Southern Stars) won the World Cup earlier this year!

Prizemoney issues aside (the Southern Stars took home $60,000 while the male winners of the Cup took home $1,000,000), the World Cup showcased the talent and competition between the female teams across the globe.

Want to try out your own luck with cricket this summer? Read on for the deets.

Are there different rules for women, like there are in other sports?

No, both genders play by the same rules.

Do we have to wear skirts like in the picture?

No! This photo was taken shortly after it was ‘discovered’ in 1922 by an Australian physical education committee that ‘that suitable physical education, including games and sports, is as generally beneficial to girls as to boys.’ Surprise surprise. ANYWAY, the cricketers who took part in the World Cup this year wore polos and slacks.

Can I join a club?

Yes! If you live in Victoria, head to this page for the list of clubs. If you live elsewhere, check out the national site for more information.

Are there any Ricky Pontings on the women’s team?

There is substantially less press for the women’s cricket team, but here’s the captain of the Southern Stars, for starters. Jodie Fields played on the men’s teams in her hometown until she reached university and found a women’s team. In 2000 she began playing on the Queensland state team and since then has become the first Queensland captain of the national team.

What’s your ultimate summer sport? Can women play it professionally?