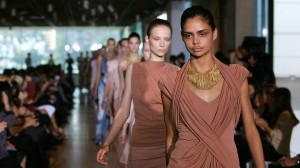 Last week was the launch of the first search for indigenous models, which will coincide with the inaugural Australian Indigenous Fashion Week (AIFW) in April 2014.

The search is aimed at shifting perceptions and encouraging diversity in the fashion industry.

Speaking at the National Centre of Indigenous Excellence in Redfern, model Samantha Harris said that she would love to see more diversity on the catwalks and in campaigns.

‘Australia itself is such a multicultural country, why don’t we celebrate that?’

Harris joins Naomi Campbell and Iman in the call for more diversity in fashion.

Both Campbell and Iman asked for an end to runway racism at London Fashion Week in September.

The models successful in the search, both male and female, will participate in a week-long training program to learn all the facets of business, including breaking into the modelling industry.

Harris and indigenous footballer, Greg Inglis will be on the panel educating participants on cultural diversity. Inglis has been appointed as an ambassador for the campaign.

Model and designer, Tyson Jolly said that there was more to the search than traditional beauty, and that it will ‘showcase a side of our culture I believe that doesn’t get portrayed enough and that’s the beauty of it.’

‘It’s an Aboriginal initiative, coming from Indigenous people for the broader community.’

One thought on “in brief: Indigenous model search inspiring diversity”