in case you missed it: lip-readings and awards night 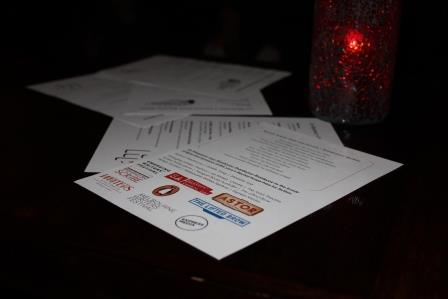 On Friday night Lip held a very special event in Melbourne. Under the lamps of yesteryear and the gaze of multiple Mona Lisa paintings in Bourke Street’s Society Restaurant, a group of Lip writers, readers and supporters came together to celebrate feminism, independent publishing and women’s stories.

To kick off the evening, our incoming Editor-in-chief introduced herself. Jo Mandarano is a feminist, writer, editor and “educational publishing pleb”. While we miss Zoya Patel already, it’s always exciting to welcome a new set of skills and ideas – we are looking forward to seeing Jo’s vision and direction for Lip.

Our first reader for the night was Kat Muscat. Kat is a feminist, writer and editor who loves talking about gender, sex and sexuality. Her piece was titled ‘So Your Dick Isn’t Perpetually Hard’, and challenged the importance society places on erections and penis-in-vagina sex. “If we could stop placing all this emphasis on one stiff (or otherwise) piece in particular I would really appreciate that and can promise increased long-term happiness for all.”

The second to speak was Emma Koehn, reviews editor at Writers Bloc and previous editor of Farrago Magazine. Full to the brim with wit and pop culture references, Emma reflected on the apparent similarities between herself and Cory Gilmore from Gilmore Girls.

Next to the stage was the lovely Lisa Dempster, director of Melbourne Writers Festival and previous director of Emerging Writer’s Festival (both of which were sponsors for this year’s fiction prize). Lisa spoke about the need for women’s stories to be told, in fiction and in society as a whole. She also remembered Rachel Funari, Lip’s founding editor and the namesake of Lip’s fiction prize. Only a few in the crowd had met Rachel, so it was sad but also inspiring to hear about her efforts and legacy in the writing industry.

Connor Tomas O’Brien announced the winners of two special South Australian prizes, which were kindly sponsored by the SA Writers’ Centre. Connor is the director of Digital Writers’ Festival and incoming designer of Voiceworks. Before revealing the names of the SA winners, Connor drew attention to the need for a national writing community in Australia, where stories beyond the cities are valued and read by all. The SA prizes were awarded to Lauren Foley for her piece ‘This One Time…’ and Maria Solecki for her piece ‘A Crack in the Cupboard’. These writers were ranked the highest in their state, and have won 1-year memberships to the SA Writers’ Centre.

Next, Lip’s editorial assistant Ruby Mahoney ran through the shortlist:

‘about the scars.’ by Grace McCarter

‘Now You Change You’ by Rosanna Stevens

‘Space between thoughts’ by Kathleen O’Neill

Ruby also presented some of the comments made by judges Melanie Tait, Jessica Friedmann and Estelle Tang. The judges had praised the non-traditional timelines and complex, relatable characters in the twelve chosen stories. They had especially loved the sophisticated way the theme ‘identity’ was interwoven with place, relationships and home. The twelve writers were congratulated on being part of such an evocative and beautiful collection of fiction about identity and women.

Finally, Jo Mandarano and Sam Cooney announced the winners of the Rachel Funari Prize for Fiction. Sam Cooney is editor and publisher of The Lifted Brow, an independent literary magazine that sponsored this year’s prize. The winners were……

Despite having no idea she’d won, Miranda had flown down from Queensland with some friends to attend Lip’s awards event. Holding back her excitement for a few minutes, Miranda read her piece aloud to a captivated audience. To quote one listener who left Lip some feedback on social media: “Miranda’s story was so wonderful! I left feeling incredibly inspired.” 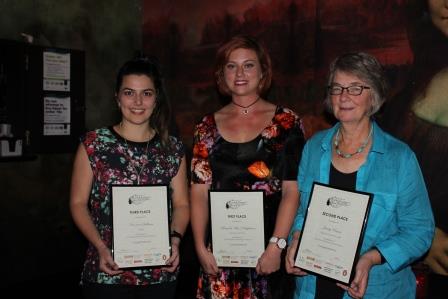 2 thoughts on “in case you missed it: lip-readings and awards night”