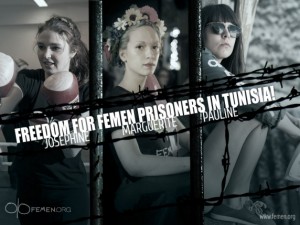 Three activists from the feminist action group Femen were arrested in Tunisia on June 13. Among the charges was ‘offending public morality’, for which, according to the Femen Germany Facebook page, the women have been sentenced to four months jail time. This contrasts sharply to the suspended sentence handed down to the men responsible for last years fatal attack on the U.S. Embassy, which resulted in four deaths and significant property damage.

Femen are often panned by feminist journalists for being culturally inappropriate, dogmatic, fanatic and anti-Islam. In their own words, they are simply taking a physical stand against the Patriarchy.

This is an excerpt from an interview with one of the imprisoned activists, Josephine (pictured far left), before she was arrested.  She is a 19-year-old student living in Hamburg. Here is her ideology in her own words:

What are the key goals of Femen?

To end patriarchy, to destroy it. Patriarchy is damaging for both sexes. It’s bad for men, but it’s obviously worse for women. Patriarchy is based on three things that really hurt women; religion, dictatorships and the sex industry. These are the three things of patriarchy that we need to tackle. Then patriarchy as we perceive it will no longer exist.

Why do you protest topless? Isn’t it objectification of women’s bodies?

I really don’t understand that criticism. How can I objectify myself as a subject when I get undressed? I don’t really see that point….we use the body as part of expressing the opinion. Our protest takes the body back to its rightful owner. It is used as a way of expressing yourself.

Perhaps the academic meaning of objectification is different to what your critics suggest? People say that men will look at you and ogle your body as a sex object, which could work against your message of empowerment if men are just thinking about having sex with you.

That’s sexist. It tells that men will just stare at our boobs and not understand what we’re really doing, and I don’t believe that. Men are way more intelligent than that.

Is Femen against religion?

We don’t care about people who pray five times a day, but we care about what they do in between those five times. They justify their actions with their religious belief. They justify the stoning of women with their religious beliefs. That is why we have to be against this sort of religious belief. I don’t really care if they are misinterpreting Islam when they call out to stone or to kill Amina for example. Obviously this is possibly a misinterpretation of their religion, but if it works and if it is possible to interpret the Koran the way they do, then there is obviously something wrong with the religion.

Do you think protesting in the streets achieves much?

Well that depends on how you want to define ‘to achieve something’. Obviously we raise some attention that is clear. We do some discussion work afterwards, once we’ve got the attention and we’re in the spotlight. We are able to discuss the issues, we go to TV stations and radio stations, we have interviews and things like this. But we need the action first to get some attention for the problems, which we discuss later. This is how we work. This is how Femen works.

I don’t think so. Always revolution was made by those who could see the problems. It’s really hard if you’re suffering all this oppression every day to rise against it….In India I could imagine that it is so much harder. I don’t want to tell these women, ‘Do the job yourself. Look at me, I’m free, you can free yourself! I won’t help you’. I think this is really the wrong way to achieve some change.

Where will Femen go from here? Is there a plan?

We want to get attention for all the problems women have, world wide. We see ourselves as a global movement. Femen will not stop existing until all these problems are solved. That’s why we will start travelling, but I don’t know where we will go tomorrow. I hope that it will continue. I hope also that it [Femen] will stop in 10 years time because patriarchy will no longer exist. We change our strategy, and we rethink it every single day. We are very dynamic. It is really an active movement. We have to look at our society, and how it changes.

2 thoughts on “INSIDE FEMEN: interview with Josephine, Femen activist”