interview with tess fisher: zombies and ninjas and beers, oh my! 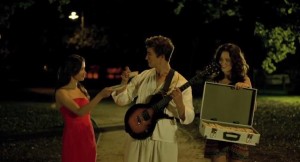 The Melbourne student (soon to be known to film enthusiasts as ‘The Nastiest Sheep’) was thrust into glorious chaos when she and a friend were selected to produce the short film for TAC whilst still in year 12.

Juggling exams, zombies, homework and ninjas proved to be a marvelous concoction. The production makes a cunning juxtaposition between social nightlife and the more serious issues of peer pressure and drink driving.

With a quirky manner that is ever-present in her work, Fisher draws influence from peers, family and her own everyday experiences.

Currently majoring in film and bouncing around new ideas for her next project, we can’t wait to see what she’ll do next.

What initially drew you to film?

My father has always been interested in film. He wrote for the local film review magazine when he was younger and passed on his love of cinema to me. He showed me “classics” ever since I was tiny; my film education began young. I remember watching Pulp Fiction when I was about seven and being horrified and in love simultaneously.

What experience do you have in film?

Throughout school I had always been interested in film, which led to me studying it in my final year. I made a short film for media as part of the assessment. The protagonist was my ever-obliging boyfriend of the time. We did about 10 takes for every shot and he always patiently listened to my direction and was a really calming presence when everything else seemed to spiral out of control. I was also very lucky that some of my close friends shared my keen interest in film. A friend and I made a short spoof advertisement for Doritos that involved fashioning giant Doritos costumes out of bamboo and asking a guy we barely knew to star in it. While I was still in school my friend Stephanie Parsons and I made a short film as an audition tape for a competition to meet Tim Burton. We had about 8 hours to write, shoot, edit and submit it, so let’s just say it wasn’t my most finessed piece of work. In our final year a friend and I entered TAC’s Make a Film Make a Difference competition and were lucky enough to be selected as winners, which was the biggest project we’d ever worked on.

How would you describe your style?

My style is quirky. I like to create things that challenge political correctness and make audiences laugh – anything with an alternative/left-of-centre twist is appealing to me.

When you are working with someone, they are definitely the biggest influence. The beauty of collaboration is that you get to see a selection of different ideas from someone else’s worldview, then together you reinterpret these ideas and reshape them into something that speaks to both of you. I also find that studying film influences me a great deal. The more you learn about the formal aspects of film and filmmakers who pushed boundaries, the more you want to build on what has already been done. My mum and dad are quite creative and I find that bouncing ideas off them always helps. Years ago my dad signed me up to the British Film Institute’s ‘Sight and Sound’ magazine. It is one of the best magazines about film out there and being able to read about what makes a film appealing to a large audience is information that shapes how you create. Most of the time it’s your everyday experiences that will influence you most and provide you with the best material. If it makes a good anecdote it can be reworked into a film!

You won the TAC ‘Make a film, make a difference’ competition in 2011, what was that experience like?

It was absolutely unreal. My friend and I wrote 10 entries in one day and submitted them all. After hours of brainstorming we descended into this pit of absolute stupidity, we were living off 7/11 food and we’re writing pitches that involved talking ferrets and Poseidon driving a car. We were astonished when one of our ideas won (we actually had two ideas that were shortlisted but could only pursue one). We were given a budget of $20,000 to work with, which seemed like a huge amount at the time, but once you begin to factor in DoPs (Directors of Photography), actors, location, assistant directors, catering, editing, a producer, a crew to look after sound, lighting, wardrobe, make-up etc. that budget gets stretched really quickly. We met so many incredible people in the process, people who had been involved with popular feature films but were totally humble and very understanding of the fact we were 17 and juggling year 12 with making an advertisement worth $20,000.

What did the process entail?

There were so many more steps involved than we had anticipated. We pitched and re-pitched our film constantly, tweaking scripts and redrawing storyboards. We regularly sat with a panel of industry professionals who would pick holes in our proposed storyline and we’d rework it. Preproduction was definitely the hardest stage. Since we were working for TAC, all of our actors had to have clean driving records and we had to obtain those ourselves, which was a really long process. We had one actor tell us he had no driving record, but when we obtained his file it turned out he’d been to the Magistrate’s Court several times for driving offences!

What were the most exciting parts of the project?

Getting our school friends involved was one of the best parts. There is a party scene where a bunch of our friends volunteered to be extras, it was exciting to have everyone on set and show them what we’d been working on for the last few months. We shot the entire film in two days, well technically, two nights, because they story takes place at nighttime. This meant two days of starting at 6PM and going through to about 3AM, that is a huge effort for a film crew, not to mention volunteers, who weren’t getting paid at all. Shooting the film was the highlight, seeing our cast work together and our storyboard coming to life. There were so many hilarious moments; the scenes of the drunk boys in the back of the car were the best to shoot. The actors were all really good friends and virtually none of it was scripted, it was just like they were acting out their normal Friday night banter. Seeing the finished product in cinemas and on TV was unreal, I was constantly flipping between channels trying to catch it being played!

How did you come up with the idea for the film?

Like I said, we went through so many ideas before finding anything half decent. It would be like, drink a bottle of Coke, talk shit, laugh hysterically, eat more sugar, come up with awful ideas, laugh and repeat for ages before we could shape our ramblings into something good. But I think that is part of the process, wading through all the rubbish before finding a gem. The brief helped us too, they were looking for something that would appeal to people in our age range; something quirky that wasn’t about gore or graphic scenes. This meant we got to be really creative and write something that would appeal to us, not a target audience we knew nothing about. We thought the juxtaposition of a few silly moments (ie. the ninja and the zombies) to underpin a really serious idea would make the film more jarring. You get lulled into a false sense of security with the humour, then the implication of the car crash makes the message even more poignant because of the contrast.

Has that opened other doors for you since?

I was offered a place at the Victorian College of the Arts to study film, and I think MAFMAD was a huge factor in them considering me. I turned down the offer because I was exhausted from spending months on the production. I didn’t think I could come up with film storylines for another 3 years consistently. It takes a lot of creativity and headspace to be able to do that. And even if you can turn on that creativity like a tap, it is still a ridiculously difficult industry to enter into. I instead chose to study Professional Communication at RMIT, which combines journalism with public relations, plus I major in cinema. I’ve always enjoyed writing and when I get back to film I think that is the area I’ll focus on.

Are you working on anything at the moment?

I was speaking to my friend recently about getting together again and working on another project. We’re thinking of getting started on it in our uni holidays. We are drawn to short films and think we’ll do some work for charity organisations, make a short ad to endorse their work. Our production name is The Nastiest Sheep, so keep an eye out for us!

Do you wish to do more work in film in the future?

Definitely. When you have something that you gel with creatively you always want to work on something.

Tell us a film secret:

Everyone knows everyone. If someone in the industry says something about someone else, it spreads like wildfire. It is such an exclusive industry that everyone is very close knit. As for a film secret in our film (the MAFMAD film), we had to buy about 15 meat pies for the final scene for our actor to eat. I don’t think you even see him eating them after all that. Also, no smoking or alcohol is allowed on set. Oh and apparently girls in bikinis aren’t allowed in TAC ads, but “sexy cheerleaders” are AOK. Very useful information for any MAFMAD competitors this year haha!

Who is your favorite director?

Quentin Tarantino. The guy is unbelievable. No one combines black humour and an engrossing storyline as deftly as him.

What is/are you favorite film/s?

Top five films would have to be (in no particular order): Reservoir Dogs, Lolita (1997), Run Lola Run, One Hour with You and Waltz with Bashir.