is society obsessed with size? 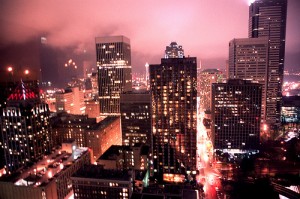 The age-old phrase rings startlingly true at certain points in our lives (think: tracksuit pants, that glass of wine after a hard day, Anne Hathaway’s smile).  However, certain people will still frequently disagree, claiming compactness is the new black.

Being of the generation who reached puberty just in time to see the introduction of the hipster skinny jean, I spent the latter part of my teenage years worrying about muffin tops – which would never have appeared had we not abandoned the comfortable boyfriend jeans and oversized jackets of the 90’s, in favour of anything tight enough to expose our kidneys. Having reached my late-twenties, I came to the conclusion that I had spent a decade downsizing and squeezing myself into spaces, places and clothing designed for something and someone much smaller. And I was finished with it.

However, the trend has continued and it is not merely jeans which have shrunk.  The 21st century does seem to function with a breathless urgency in our constant struggle for compactness. Smaller cars, smaller food portions, smaller living spaces, smaller train carriages, smaller clothing sizes. We have downsized our old organisational system from a combination of diaries, calendars, address books, street directories and newspapers to just an iPhone, servicing all of the above. One of the electrical giants has even launched a smart watch which, I believe, is a phone providing all the services above, worn on the wrist, rather than carried in the pocket.

The problem here is that not all of us adapt to change at lightning speed. I count myself amongst the slower end of adapters. I am quicker to see the disadvantages than the benefits of change. Some call that pessimism. I call it realism.

But, titles aside, I am always willing to “have a go” and attempt to make changes work.  I have a small, three-door car which uses very little petrol and never ceases to make me feel completely unsafe as I battle through Sydney’s main roads in the shadow of buses, double-carriage trucks and other vehicles would could swat me off the road without even feeling a bump. I have tried eating smaller meals to make my stomach smaller (to ensure I continue to fit into my small jeans) and I find myself constantly hungry. I even signed up and got myself a smart phone and now find myself forgetting birthdays, paying bills late and mysteriously not turning up for appointments and meetings.

I am a tactile, list-making person who gets a thrill out of colour-coding events on my calendar with different highlighters – blue for work, green for social, red for bills, purple for appointments. That approach worked for me.  But now, having downsized into the current western world where everything is in miniature, I am a lost, hungry, paranoid driver with a disorganised business and social calendar. A real 21st century woman?

One point, however, on which I will not budge – or be downsized – is my handbag. I am a serial Santa-sack-toting, kitchen-sink-carrying, large-handbag girl. Years ago, after a night out, I threw my potato-sack of a handbag away in frustration.  It had done nothing but be a nuisance all night, hanging off my shoulder like a small child. A friend convinced me to try a little, over-the-shoulder bag and, at first, it was fabulous. It was just big enough for a small wallet, a mobile phone, lipstick and keys. It was light, easy to carry, never gave me a sore shoulder, and I never found myself ripping hair out when it got stuck under the strap.

But then one morning I found myself waiting for an overdue train and, as always, delved into my bag for a novel, only to come up empty-handed. No book. No notepad to scribble on. No diary. As the day wore on, I began to notice all the things missing; no tissues, no pen, no perfume, no compact mirror, no painkillers, no water bottle, no emergency bobby pins hidden in the bag’s depths.  Mostly because this bag had no depths.  I promptly returned to my old bag, filling it to capacity, and enjoying its weight tugging my shoulders back out of alignment once again.

There has always existed a conflict between fashion and function in the female world. Are the latest Jimmy Choo’s really the best choice for a beach party?  Are tight jeans the best option for hiking up a mountain?  Ultimately though, it is about neither fashion nor function.  It is about finding your own style, your own field of comfort.  And your own size. Sometimes smaller is better but different sizes suit different people.  Find your size and stick to it – regardless of whether you are living in an upsized, a downsized or an upside-down world.