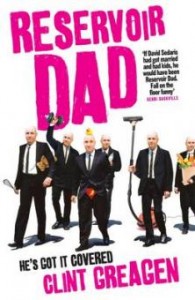 Feminism. Proudly screwing up gender roles since the seventies.

Generally, when we hear about the subversion of gendered tasks, most narratives are from women taking on masculine roles. There aren’t many accounts of men taking on roles that traditionally belong to women – but new memoir Reservoir Dad by Aussie blogger, Clint Greagan, who is a SAHD, tells all.

Known for his popular blog, Greagan’s memoir starts from the day he proposed to his wife, Tania, and details the journey of his fatherhood from before it even occurred and the seed of full-time devotion to his four children was planted.

It begins with a cleverly planned prologue in which he gives us a small bite of his frantic mornings before school. He depicts a scene that is both funny and frustrating, and we sympathize with him. The narrative then steps back into a peaceful pre-children life, highlighting the strong bond shared by Greagan and his wife.

The author tells about his exhausting days with glee and amusement. His writing is honest and descriptive and makes you feel the moment; his stress, anxiety, love, and anger. His days are filled with screaming, restless, toddlers, which he relates without censorship. An anxious but loving father, Greagan’s writing, with the ups and downs of his life is surprisingly moving. He’s descriptive and his narrative likes to play with time, as he skips years and months and makes eight years seem like very little space in between the prologue and his last words.

Clint not only narrates his life, but also gives advice about parenthood, a healthy marriage and active sex life, and how to be more open-minded. He’s a role model for not just other stay-at-home dads, but for mums, too.

Thanks to Greagan, SAHDs are becoming more socially accepted. Until recently, SAHDs were rare and preferred to go unnoticed, but now they’re coming out, loud and proud. The change they’re trying to make is so the decision to stay home with the kids isn’t seen as a failure of career, but as a lifestyle choice. These are modern times; 40% of women in first world countries out-earn their husbands. SAHDs try to change the meaning of success, failure, work, and family lifestyle.

In June 2014, a study made by the Pew Research Center showed an increase in SAHDs in the United States since 1989: nearly two million fathers stay at home with their children. It makes a point in differentiating thickly between fathers who stay at home because they are unemployed (23%) and the ones who stay at home to care for their family, which are a 21% (35% are ill or disabled and 22% are retired).

However, there has been a critique made to this study, criticising mostly the terminology employed by the research center. For example, their definition of a stay-at-home dad refers to ‘those fathers not employed for pay at all in the prior year and living at home with their children younger than 18.’ So we find this definition is not truly about fathers who care for their young children, but rather about fathers who happen to be unemployed and living with their underage child.

Sadly, these two classifications of ‘father’ are worlds apart. Although this study has helped change attitudes towards fathers who stay at home, the major conflict with this research is the approach to SAHDs based on their employment. However, there has been a significant rise in fathers choosing to stay at home (from 5%- 21% of all SAHDs) and that’s an advance in defeating stereotypes. These dedicated fathers are part of the change that’s taking over the world, the fading of the separating lines between male and female roles.

Alex French, another daddy blogger, narrates an episode in which he would ‘…spend my days at home marooned in my own head, feeling bad about spending money because it wasn’t money I’d earned. Feeling guilty about eating because it was food T. (wife) had paid for…’ While this has been a female experience for hundreds of years, for a man to not be the financial provider for a family is a fairly new idea.

Discrimination and disdain are come from men and women alike. Greagan tells of his experiences of both men and women who look down on him and offer mean comments. He relates a scene in a bank in which he chooses a pink credit card; a direct affront to the bank clerk and, most importantly, social clichés.

Greagan’s wife is patient and supportive, who also has occasion  to tell about her experiences with her work colleagues or people on the street. It seems many pity her for having a husband who takes care of the kids, as if he were inept or unsuitable for leaving the house in decent conditions. She shares her distaste for such people, taking part of the Reservoir Dad rebellion.

Reservoir Dad is, undoubtedly, a role model for all people. His writing is simple, easy, and strikingly effortless. His talent for helping and relating to other people (by profession he’s a youth worker) shines clearly and his failures and imperfections (which he confesses without discretion) make him all the more relatable. His playful, whimsical attitude and silly idioms keeps the reader on their toes and on the edge of their seat. Reservoir Dad is, without a doubt, an insight into the shifting gender roles of modern society.