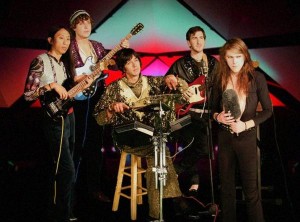 I have to start this concert review a little differently than the standard because Ariel Pink’s Haunted Graffiti is nowhere close to typical. How can I describe the magical weirdness of Ariel Pink?  His ‘not all there’ personality, random lyrics, misguided intensity and public moments of self-loathing make him the premier hipster superstar he is. His shows are as much about his personality and tendency towards temper tantrums as much as they are about his unique brand of lo-fi psychedelic freak folk.

It’s safe to say that Ariel Pink is a bit of a ‘mad genius’, as evidenced by fellow ‘lo-fi weirdo’ Wayne Coyne’s introduction in the above video. He’s been involved with several different live outfits before solidifying his band Haunted Graffiti in 2008, he’s made making his own albums for over a decade and was the first musician signed with Animal Collective’s label besides the members of the band in 2004. After he started performing exclusively with Haunted Graffiti, his sound shifted to a much cleaner, more clearly produced and more easily accessible style than his earlier sound and he began to play shows to people who didn’t hate him so much.

Indie music bible Pitchfork gave the band’s June 2010 release Before Today a prestigious 9.0/10.0 score and named lead single ‘Round and Round’ the best song of 2010. Either one of these honors from the online music magazine is enough to catapult a buzzband into the mainstream; after earning both, it’s no surprise that Ariel Pink’s Haunted Graffiti has garnered significant mainstream popularity over the past year. The band’s reputation and hint of underground status have brought them to New York several times this year, and on June 2, 2011 I went to their show at Irving Plaza (Fun fact:  I hadn’t been to the venue since 2005, when 16-year-old Christine Campbell was the youngest VIP audience member at that Robert Plant & The Strange Sensation show… my, ‘what a long, strange trip it’s been’).

As much as I wanted to wait for a New York City-sized meltdown to confirm that the band is overrated and totally sucks, the longer I stood listening, the more I realized that their sound is what draws people in over theatrics or a shared love of psychedelic drugs. I’ve got to be honest: I walked in thinking everyone was there for the spectacle. But as the show went on, it became clear that everyone really was there for the music. The crowd at Irving Plaza was diverse, ranging from people my dad’s age to neo-hippie girls to Brooklyn hipsters to bros and everyone in between.

Ariel Pink’s Haunted Graffiti played a really entertaining set. Amidst the yelps, one-sided conversations and frantic happy introductions of guest band members, the group delivered a great mix of technically perfect versions of ‘Bright Lit Blue Skies’, ‘Menopause Man’ and ‘Beverly Kills’ off 2010’s Before Today, as well as more accessible older songs like ‘Credit’ off 2005’s Worn Copy and my personal favorite and second encore song ‘Hardcore Pops are Fun’ off 2006’s House Arrest. Regardless of whether the majority of the crowd had an idea that there was an Ariel Pink before Pitchfork or not, there was that almost cheesy feeling of the true universal connection of enjoying the beautiful oddity of the live performance with your fellow man. That’s what makes concerts so great, and Ariel Pink’s Haunted Graffiti delivered a good show from technical, danceable and comedic viewpoints. And I mean really, what else can you ask for?