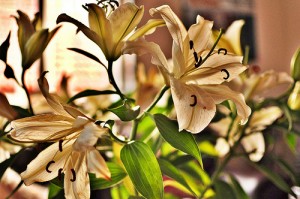 There are people everywhere. And yet the house is empty. I am floating on a stormy cloud. I am not struggling to stay atop it, but rather, struggling to understand why I am not falling through. There is nothing concrete under my feet. The ground is a thousand miles beneath me and yet it is not rushing towards me.

Outside my bedroom, people are trying to make it okay. They come in droves, dropping off lasagne and cards and bunches of freshly killed lilies. I hear my grandmother greet them at the door, because my mother can’t move from the lounge chair my younger sister Lisa had claimed as hers. They walk past my bedroom door and tell my grandmother the press is outside. My grandmother says nothing because it’s the fourth time she’s been told.

Nothing is moving. I have been sitting here watching the sun rise and go to bed, time and time again. The sun sleeps. The moon sleeps. I never sleep but I am in a continuous dream. I can hear people talking far below. I can hear their words, but I cannot understand what they are telling me. I recognise the people below by the way they move, but I cannot distinguish one face from the next.

One morning, I wake up.

‘Do you know what you are going to wear?’ someone asks.

The house is quieter today. The lasagnes are still pilled high in our freezer, and uneaten stews sit, starting to collect mould, on the kitchen bench. The phone rings, constantly, like a phone alarm that someone has forgotten to turn off. ‘Perhaps go straight to the school … Yes, we have someone to drive us … Yes, there will be a wake,’ my grandmother repeats into the phone.

The shadows are much closer now. And I can see a little colour. But there is no yellow or white. Just dark hues merging each scene into the next. Large sunglasses shield my eyes. Life isn’t so scary through the lenses, just a little darker.

We enter the church. I am not sure who ‘we’ is though. Kris, my boyfriend, has a tight grip on my hand, as if I too might slip away if he lets go. My mother and father walk side by side, but they do not touch, cannot touch. The others, I see them, but I cannot recognise them. I cannot see beyond their tear-streaked faces and downcast eyes. I grew up alongside them, but I no longer know them. Two wooden cradles nurse bundles of white blankets wrapped in white sheets. It is the only white I’ve seen for so long now. I place the letters I wrote my sisters in their caskets.

The next thing I know, I am sitting in a row of chairs alongside my parents, Kris and some other shadows. When I turn around, I gasp. So many faces stare into my eyes. But the tears in mine prevent me from seeing the tears in theirs. I feel a hand on mine. It feels like warm metal.

There are hundred of them, people seated in neat rows as if a little organisation will make everything neat again. At the back, people unable to get a seat stand in groups, in lines, in layers five or six deep, their eyes focused on us at the front. I’ve come here every day, five days a week, for five years now. My mum said the church wouldn’t fit us all; we have to hold the service in the schoolyard where they usually hold mass. The emblems on the students’ school shirts feel rude; it feels like they are saying this is the uniform your sisters will never wear again.

I am not sure how much time has passed, but everyone is standing now. Then, suddenly, we are at the back of the audience gathered to watch what death does to people: it orders them, into tight, straight lines and small groups and shallow faces with eyes rimmed in red. I take my sunglasses off. There are people everywhere. So many people. Face, after hand, after hug. Face, after hand, after hug. I stand next to my mother and try to block out the sobs that are choking her voice. Someone says sorry, and my mum tells them it’s okay. Later, my father will tell me it’s not okay, and push the Bible off his desk. I will never understand why all these people say sorry for something that wasn’t their fault.

I think I was away from school the day they taught everyone how to hug. I don’t know where to put my hands. How hard to squeeze. How long until I am supposed to let go. I don’t know which way to look. I don’t know if it is okay to snot all over these people’s clothes, or acceptable to blow my nose really loudly. I just don’t know. All I know is there are so many faces. Too many faces. I feel like I am lying in a bath and someone has laid a film of glass across the water’s surface to prevent me from taking in any air. I put my sunglasses back on. I feel a little safer now.

I look for a familiar face. I know most of the faces by name, but so few of them feel familiar to me. Tarni. She takes the seat next to me in the black car. Then she takes my arm. Or is it my hand? I won’t remember the drive. Nor the few feet we have to walk from the safe refuge of the car’s tinted windows to the freshly dug hole in the ground. The sun feels inappropriate, like someone is sticking a rude finger up at me in the middle of mass.

The next hour is a blur of cool greenery, hot yellows and pale faces. Four men are lowering the caskets, one on top of the other into the hole, using long, thick, black belts to lever them down gently. Tears and rose petals flow in after them.

I stand opposite my parents. Kris asks if I want to stand with them. Yes, I want to say. Take me to them. But instead, I stay where I am and watch them across the hole that is quickly being filled by the dirt that will keep the girls hidden. My father’s hands are filled with scrunched-up tissues. Someone has their arm around his shoulders, trying to still them as they heave violently up and down, up and down in time to my mother’s sobs. My mother is looking away, her eyes moving as if counting the birds that fly overhead. But there are no birds. Just bodies and babies and flowers and misplaced ribbons, discarded on the muddy grass and dirtied under people’s slowly shuffling feet.

When we get home the front veranda is completely covered. Flowers, packages, cards, trays of food. I dwindle behind the others, letting them go ahead. My mother stands in the mess of it all, her dark hair stuck to her forehead like a tattoo gone wrong. My father stands by the door desperate to get inside, to go back to normal, to search the internet for clues that might provide an answer to how and why and who can take the guilt away. As someone turns the key in the front door, I bend and pick up the first package my fingers fall on. The August issue of Girlfriend magazine is enclosed within a sealed plastic sleeve. The cover letter reads: ‘Miss Carlie Higgins’.

Don’t the people who send out magazines know she doesn’t live here any more?

One thought on “memoir: the aftermath”