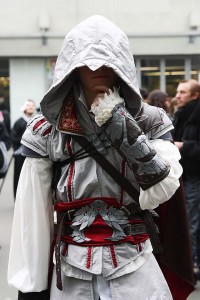 I’m a huge fan of the video game Assassin’s Creed. Even though its logic can be quite flawed and it seems the creators didn’t do much historic research, it still falls under that way-too-addictive-for-this-to-be-legal category. Thus, I have lost many an hour pretending to be a guy spreading the good faith to his fellow villagers.

So, it can’t really be a surprise that the upcoming Assassin’s Creed game, Unity, lacks that feminine quality. But, the creator of Ubisoft, James Therien, recently made this matter much worse by publicly stating that adding female characters to the game would have “doubled the work” and therefore they decided against it.  Therien stated that ‘a female character means that you have to redo a lot of animation, a lot of characters … It would have doubled the work on those things. And I mean it’s something the team really wanted, but we had to make a decision … It’s unfortunate, but it’s a reality of game development.’ And even though the team really wanted to include female characters, the decision was made because ‘it was a question of focus and a question of production’ not ‘a question of philosophy or choice.’

But didn’t we recently find out that the best way to fight sexism in gaming was to get men to play female characters? And in that same study, we found out that women make up ’45 per cent of gamers and are 46 per cent of the most frequent game buyers.’ If half of the buyers of games are female, then why is it so much of an effort to put in female characters to, perhaps, please those buyers just a little bit? I mean, now that I’ve seen Ubisoft’s statement, I’m not too keen on buying the next Creed game. Boycotting purely because I don’t want to support a company that chooses the easy path instead of the equal/right path.

Feminist website, Jezebel has voiced my feelings on this very well – stating ‘Seriously, people. Just take a male character and make him female. Seriously. Seriously. You don’t have to change the dialogue so it has more feelings in it, or add a subplot about menses, or make your animators pull an all-nighter to add some massive, globular cans. Just be like, oh, this assassin’s name is Becky. DONE.’

Totally agreed there and unfortunately it is probably true that female characters are rarely put into games because their huge breasts are too hard to animate, but we really don’t need that sort of profiling in video games (we already have it in all other forms of media and entertainment!)

Ubisoft’s statement is not a unique one though. Before the hit Pixar animated film Frozen hit screens, the lead animator Lino DiSalvo stirred up controversy claiming that it was ‘really, really difficult’ to animate women, basically because they have to be kept pretty. And those comments are quite inherent in Disney’s aesthetic, as time after time, feature films from Disney have chosen to portray women ‘as cardboard cutouts because directors choose to make these types of films – and entertainment companies profit handsomely when they do.’

The name of the game then, is profit. And so if these companies keep making money they will never change their attitudes or decide to up their work ethic and put in the extra heavy-duty hours to animate some girly lips or long hair. However, if half of the buyers of games are females, just imagine what would happen if those woman chose to simply not buy a certain game based on the fact that the company refused to work hard to make things equal for all of their customers. Maybe then, and only then, would a big company such as Ubisoft chose to listen.