no place for a lady: contemplating online sexism and misogyny 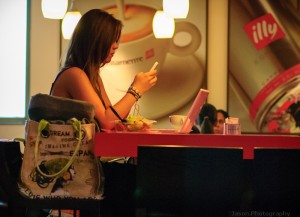 A recent social experiment which took place on subreddit TwoXChromosomes, a forum related to gender and intended for women’s perspectives, saw a man set up a female profile in order to prove his preconceived notion that women ‘have it easy’ on dating sites. Unsurprisingly, the results of this social experiment caused the man to have a 180 reversal on these original thoughts.

The reasons for this 180 may indeed be obvious, but let’s run through them here. The male pretending to be a female received a deluge of aggressively sexual come-ons, requests for nude photographs and hostile messages if he expressed a lack of interest. The social experiment lasted for just two hours before he deleted the profile.

The man in question stated that this was due to the barrage of ‘needlessly sexual’ and insistent messages, and that he ‘went about the rest of [his] night with a very bad taste in [his] mouth.’ The post received over 800 comments with many females stating that they’d had similar experiences and that it was indeed hard to brush off all the negative attention. The male’s consensus from the social experiment was that ‘women have it so much harder than guys do when it comes to that kind of stuff.’

However, these women could not simply delete their profiles after two hours unless they wanted to remove themselves from online dating altogether.

Although this kind of social experiment is great in the way in which it has exposed this man to the difficulties of being a woman online, and given him a new perspective and understanding of the objectification and harassment that occurs, as well as the effects on the individual in the face of this; it is also disappointing that these facts are even enlightening.

Recently, there has been no shortage of discussions both online and in the mainstream news outlets about the difficulties women face online, whether it be in online dating, gaming or social networking. The best way to understand what women go through in cyberspace, it is not pretending to be a woman, but rather listening to real women and truly believe what it is they are saying, rather than just assuming that they misunderstood any given situation, or are exaggerating.

This experiment follows in the footsteps of another social experiment conducted on dating site OkCupid, this time by a woman. Alli Reed created the ‘worst online dating profile ever’, a woman who was narcissistic, racist, a bully, a gold-digger, a liar and a 25-year-old fan of Aaron Carter. But Reed attached a photo of a physically attractive woman to the profile, and found that these nasty personality traits were overlooked, and received 150 messages in 24 hours.

Reed concluded from her experiment that ‘I could only extrapolate from my data that men have been so deeply socialised to value women solely on their appearance that many of them seem unable to take any other aspect of who she is, such as intelligence or capacity for self-reflection or suffocating douchiness, into account.’ Pretty depressing stuff for those women who are looking for love in cyberspace.

However, it must be clear that such demeaning acts and messages towards women in cyberspace are not confined only to the realms of online dating. It happens on popular social media networks, including Twitter, where Caroline Criado-Perez was on the receiving end of a torrent of rape threats for campaigning to get a female face on English banknotes. (Ultimately, Criado-Perez was successful in putting author Jane Austen’s face on the new note, announced by the Bank of England).

There is also the phenomenon of Revenge Porn (RP), which is the online distribution of nude and topless photos without consent in an effort to humiliate and hurt their targets, which are mostly female. Such pictures are often uploaded to RP websites by angry ex-boyfriends or malicious hackers with identifying information about the victim, including their full name, email address, workplace, city, even her boss’ and parents’ phone numbers. Followers of the RP websites then may harass the victim, often forwarding the photo to family members, friends and business contacts; which often results in a strain on personal relationships and a loss of employment.

The case of Kayla Laws and her experience with notorious RP website Is Anyone Up? can be read here, after her email was hacked, and then the website’s owner refusing to comply with the Digital Millennium Copyright Act in taking down the photo. Her mother Charlotte’s battle with the website and her story is definitely worth a read despite its length. It’s truly frightening what happened to Kayla, as well as what has evidentially happened to other innocent women online; as well as the repercussions it can have on their lives.

It’s clear to see that although the Internet has been great for many things for our generation, it clearly has a long way to go in the manner in which it treats women.

One thought on “no place for a lady: contemplating online sexism and misogyny”