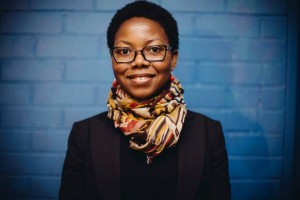 NoViolet Bulawayo at the NYWF launch.
Photo by Sarah-Jane Edis

That great storytelling can have huge effect upon a reader – that books can allow us the possibility of transportation, escape, discovery – is why so many people braved the uninviting weather to come to the National Young Writers Festival 2014 launch on a rainy Tuesday night. That, and for the chance to hear Zimbabwean novelist NoViolet Bulawayo expand on the subjects of life, fiction, and their meeting points.

Bulawayo began by reading from her novel, the 2013 Booker Prize-shortlisted We Need New Names, quickly immersing the audience into the mind of Darling: the young, perceptive narrator from a slum in an unnamed African country who, midway through the novel makes her escape to the so-called promised land of the United States. The author is impressive, eloquent, and funny. Although we were all listening to her mesmerising voice in that cold car park, we were also sitting in Darling’s aunty’s spotless living room in her McMansion, feeling Darling’s embarrassment as her aunty struggles awkwardly with her second language, English. We were all experiencing Darling’s pain, her frustration, her rising need to correct her aunt, her desire to protect herself through a more competent acquisition of this difficult tongue.

We Need New Names is a novel about cultural identity, about displacement; it’s also about global politics, about finding a place in the world. Our lives, however far apart they may seem sometimes, are always lived in the same world whether we live in a share house in Melbourne, a penthouse in New York, or a slum in Zimbabwe. In her TED talk, novelist Chimamanda Ngozi Adichie spoke about the danger of a single story. ‘The single story creates stereotypes,’ she said, ‘and the problem with stereotypes is not that they are untrue, but that they are incomplete. They make one story become the only story.’ Bulawayo echoed this sentiment, quietly but firmly stating, ‘I don’t believe you live life as an individual.’ We Need New Names alternates between Darling’s singular perspective and a collective voice that articulates the struggles of our globalised modern-day lives.

When Bulawayo writes from Darling’s perspective, she is not writing a fictional work that has no reference to the world. Darling and her friends live in a slum, in a country that remains unnamed throughout the novel; nevertheless, as Bulawayo confirmed, ‘We all know it’s Zim.’ Darling’s Zimbabwe is bleak, populated by starving children, fathers dying of AIDS, and dead bodies strung from trees. Bulawayo spoke about how she was captivated by Darling’s strong voice; how her child’s perspective took over the book and helped her to talk about the big, uncomfortable issues that dominate Zimbabwean life. Bulawayo is glib as she says that the key message of the novel is that ‘our world is messed up,’ and there is laughter from the audience – but it’s the kind of wearied, self-aware laughter that happens when someone has just uttered a depressing truth.

Fittingly for a writers’ festival, Bulawayo’s reading was accompanied with plenty of sound, tried-and-tested advice for budding wordsmiths. ‘Read,’ she urged. ‘The world of reading is a world where, excuse me, but everyone should have a fricking Visa!’ Young writers need to read, and they need to write, not just for the sake of reading or the sake of writing, but to understand what’s out there and where their writing fits in the broader cultural conversation.

For Bulawayo, writing about her homeland and the immigrant experience is a necessity; she writes the stories of the people she feels she ‘has a responsibility to represent;’ and around the questions she feels need answering.

Bulawayo discussed the difficulties she’s experienced, not necessarily being critiqued as a Zimbabwean or an African author, but in the catchall category of anyone not white and Western; some audience members wondered, too, if she felt she had been received differently because she was a woman. The author admitted that acclimatising to American culture had been hard for her; having grown up in a society where women simply spoke their minds, she was surprised at how little voice women, and especially women of colour, have in the US. However, she posited the idea that the categories with which others can seek to define us, restrict us, can actually sometimes be helpful; that being taught alongside other black female authors was an honour, and that she hoped her readers were finding a variety of new perspectives in their literature through use of these labels.

Bulawayo’s attitude to storytelling is not one of simple escapism or catharsis; rather, the written word is a tool for discovery and understanding, and maybe even a solution to some of the world’s ills. She is sure to inspire the attendees of this year’s National Young Writers’ Festival to look at the world in a new light.

This year’s NYWF will run Oct 2-5. You can find out more here.