on women, writing, and being stellar 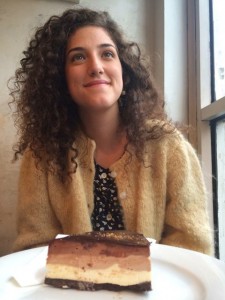 ‘There’s still an elephant in the room,’ says Francesca Ohlert.

We’re speaking on the phone about novels. And writers. And culture. And the fact that when we consider major Australian novelists (Tim Winton and Christos Tsiolkas, for example), men come to mind.

You see, there is gender inequality in writing. The elephant in the room is the default male voice; prolific (white) male writers seem to represent all Australians, while women’s novels are marketed, presented and perceived as female.

Francesca is the deputy editor of The Suburban Review, a literary magazine that began in 2013. It’s a small press that is a little left of centre, with writing designed to ring true. This edition, though, Francesca is piloting the ship as guest editor-in-chief for The Stellar Edition – a celebration of women’s writing.

‘As far as things go this one is closest to my heart,’ says Francesca, ‘Which is why I stepped up to the role.’

‘The Stella Prize was the catalyst for doing this. We thought about getting some more celebration of women in a really small press. Which is why I like the ‘r’ at the end. It’s like, “Yay!”’

Celebrating female achievement in Australian literary writing, The Stella Prize is named after Stella Maria ‘Miles’ Franklin. The program was officially launched in 2013 in the face of gender discrimination across the Aussie literary landscape. ‘In early 2011,’ the website states, ‘Only 10 individual women have ever won the Miles Franklin Literary Award over it’s 54-year history.’

The Stella Count is another way to understand the continuing gender inequality of the writing world. A count of the books reviewed in The Weekend Australian in 2011 revealed only 30% were of books by women.

‘I’m a creative writing student myself,’ says Francesca, ‘And I noticed in my courses, it’s female-dominated. But submissions to journals are more equal, with male writers more willing to push, to put themselves out there.’

Speaking about what she wants from her volume of The Suburban Review, Francesca doesn’t want to exclude or diminish male voices – this edition is purely to honour the work of female writers.

‘It’s like chocolate cake – not violently necessary but just really awesome. It’s a party, a celebration of the way women write. We want to offer that exclusive recognition to the small press and the emerging writers. We want to do it in our own way. ‘

In April, The Advertiser columnist Nicolle Flint argued The Stella Prize makes it appear that women ‘are incapable of competing with men on an intellectual basis’. She claimed the prize ‘rewarded people for the mere fact of their gender.’

Characteristically, the News Limited newspaper failed to encompass the systemic privilege of the white male voice.

‘Probably most literary prizes are prizes for male writers,’ counters Francesca. ‘The Stella Prize is something that’s always needed.  I think all voices are needed. To rally against it like [Flint’s article] strikes me as counterproductive. The Stellar Edition is coming out of a place of need; not of aggression, but enjoyment. ‘

Not long ago, the Suburban Review team embarked on a Pozible campaign to raise funds for The Stellar Edition.

‘We actually reached our initial target two days ago [July 30]. All of those funds go to paying our contributors $100. We’re also donating one dollar from every copy sold to the Stella Forever Foundation which is trying to make The Stella a fixture in the writing scene.’

‘While we’ve already hit the target, we’re trying to raise a little bit more money to go to Stella Forever and printing some more copies. It’s a nice thing to see blossom.’

You can donate to the Stella Forever Foundation or the Pozible campaign for The Stellar Edition (there’s still 10 days left!) Check out Suburban Review here.